NAB one to watch: Jacob Tratt

Wellington Phoenix defender Jacob Tratt is another excellent example of how performing strongly in the PS4 NPL can lead to chance at a Hyundai A-League club.

The 22-year-old was plucked from the PS4 NPL NSW by ex-Wellington boss Ernie Merrick before the start of the 2016/17 Season after proving himself a handy player with Mark Rudan’s Sydney United 58.

And Tratt has settled into life in the Hyundai A-League with ease, which is why he’s one to watch in the race for the NAB Young Footballer of the Year Award.

The Dubbo-born defender is at his second Hyundai A-League club, after previously being on the books of Sydney FC. 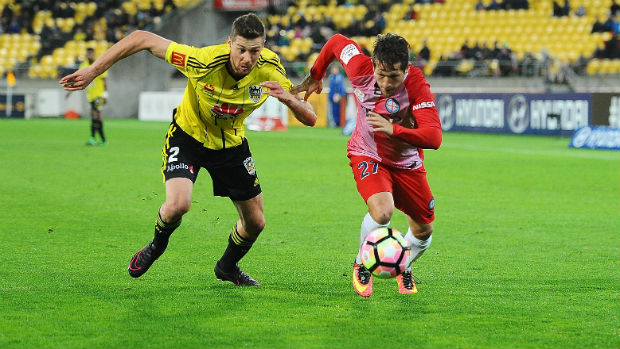 He led the Sky Blues’ National Youth League side to the title in 2014 and a year later went on to sign a first-team contract, but never made an appearance for Graham Arnold’s troops.

He went back to the NPL to try and kick-start his career and it’s paid off, arriving in Wellington a more mature and well-rounded player.

Tratt, playing at right-back but equally comfortable in central defence, has made 10 appearances this season and been one of the Phoenix’s most consistent players.

He’s more than held his own against some handy attackers, including the likes of David Carney, Fernando Brandan, Andrew Nabbout and Diego Castro.

The former Sutherland Shark has been superb in his defensive duties, winning 31 aerial duels at 71%, winning almost 85% of his tackles, while making 30 clearances and 41 interceptions.

Just as important in Phoenix’s style is his ability to get forward and Tratt has had 14 successful dribbles, four shots at goal, made five key passes and played in 14 crosses from open play.

He is relishing his second shot in the big time.

Not bad for his rookie season and it’s why he’s in the running for the NAB Young Footballer of the Year.