The Wellington Phoenix’s hopes remain alive in their fight for the finals, with some good form being shown recently. A huge 5-0 win over the Newcastle Jets was followed by an equally impressive 3-0 away win over the Melbourne Victory. But this match against Sydney FC is a “must win” with the Nix, who sit four points behind the sixth-placed Perth Glory.

It’s not going to be easy, however, with the match being played against Premiers Sydney FC, who have remarkably lost just one match this season.

Returning to Wellington, now playing for Sydney, is one of our former goalkeepers Danny Vukovic. On the flip side, Andrew Durante and Shane Smeltz could both feature against their former club.

Sydney FC have only lost one game this season, but that might have changed if the referee hadn’t blown his whistle for a few tight calls back in round 3.

Despite the fact that the Phoenix had lost 1-0 and 2-0 to Melbourne City and Perth Glory and Sydney had won both of their opening games 4-0, it was a very dominant impressive from the Phoenix.

Both Michael McGlinchey and Roy Krishna hit the net, but had their goals ruled out for debatable offside calls, while Tom Doyle was unlucky to be denied by the bar.

Sydney came out strongly after the break, but resolute defending from the Nix kept them out.

It all appeared to be heading for a draw, but a Michael Zullo cross found Matt Simon who headed on to Milos Ninkovic who put it in the back of the net to break Phoenix hearts.

Sydney have only lost a single game this season, and their recent form has been amazing. They’ve just conceded one goal in their last five, and that was five games ago in their 3-1 win over Melbourne City. In their previous four game they beat Melbourne Victory and the Central Coast Mariners 1-0, and Perth and Melbourne City 3-0.

Co-coaches Des Buckingham and Chris Greenacre will be without Jacob Tratt as he has returned to Sydney for personal leave, Matt Ridenton is also doubtful, and Dylan Fox has hyperextended his knee. With Louis Fenton also a long term absentee, it appears there is a headache for Des Buckingham over the right back slot. For Sydney, Josh Brillante and Brandon O’Neil will both be suspended, with Seb Ryall also under an injury cloud. 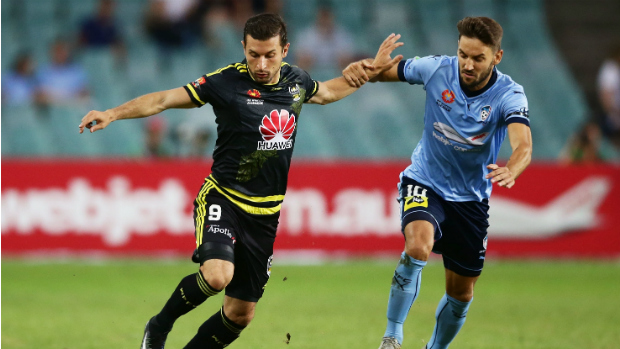 Milos Ninkovic has not only been absolutely key to Sydney FC’s title winning campaign, but will be looking to make it three in three against the Nix having scored against them in both of the previous games this season.

Elsewhere in the A-league: (Times NZDT)

Perth Glory vs Brisbane Roar 12.00am