The Wellington Phoenix have claimed an imposing 2-0 win against the Newcastle Jets tonight, picking up their second win of the season at the tail end of a tough schedule of three matches played in seven days – thanks to the goal-scoring efforts of David Ball and Ben Waine, along with a clean sheet courtesy of Oli Sail.

The Phoenix welcomed back both Tomer Hemed and Ball for this match, with the latter slotting in the starting line-up. Joshua Laws would join Ball in the starting 11 at the left-back position – after sitting out the past two matches – with James McGarry heading to the bench. Cameron Devlin would also be a late scratch from the match due to illness.

The match would kick off with Newcastle’s Matt Millar having an early chance on goal; Laws breaking up the play to set the defensive tone for the Phoenix. The Jets would come close at the nine minute mark on a Roy O’Donovan header, which Sail would spectacularly save to deny the forward.

The Nix would showcase both good discipline and solid defence in the first 15 minutes, blocking two of the Jets four attempts and playing with energy all over the pitch.

That energy would give the Phoenix an early lead at the 23 minute mark, with Ball’s attempt from outside the box slightly deflected off a Jets defender before hitting the back of the net.

That goal, Ball’s second goal of the season, would put the Nix up 1-0 with Davila picking up the assist. It would also be only the first time in four matches that the Jets had conceded a goal. 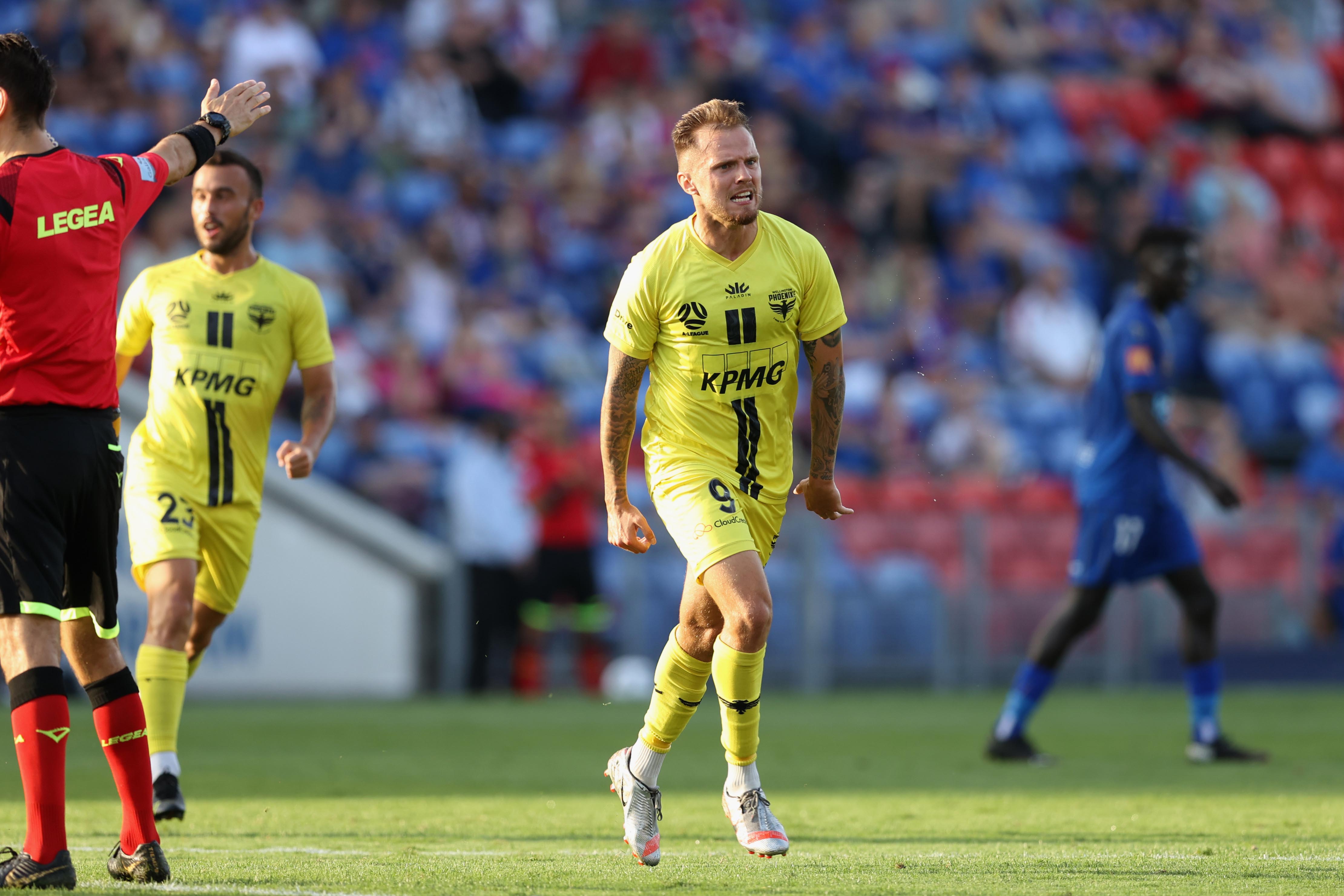 The Jets would attempt to equalise at 31 minutes, with Steven Ugarkovic’s long attempt from outside the box sailing wide. A subsequent attempt from O’Donovan would go wide of the goal, and later attempts by Millar and Valentino Yuel would also be in vain.

The first half would see Phoenix ahead 1-0 at the break thanks to the brilliance of Ball; Wellington shining on defence thanks to Sail’s tenacity in goal, along with an impressive six blocks registered by the Phoenix backline – the Nix also looking much improved in defending the corner.

The second half would see Yuel’s attempt, at the 51 minute mark from outside the box, deftly saved by Sail. The Phoenix would push back quickly, and Ben Waine would take the opportunity to launch a long-range strike that was on target – much to the youngster’s delight – to put Wellington up 2-0.

It would be Waine’s first goal of the season and second of his A-League career. He would almost get himself a second goal only a few minutes later too, but his attempt would hit the side of the net. 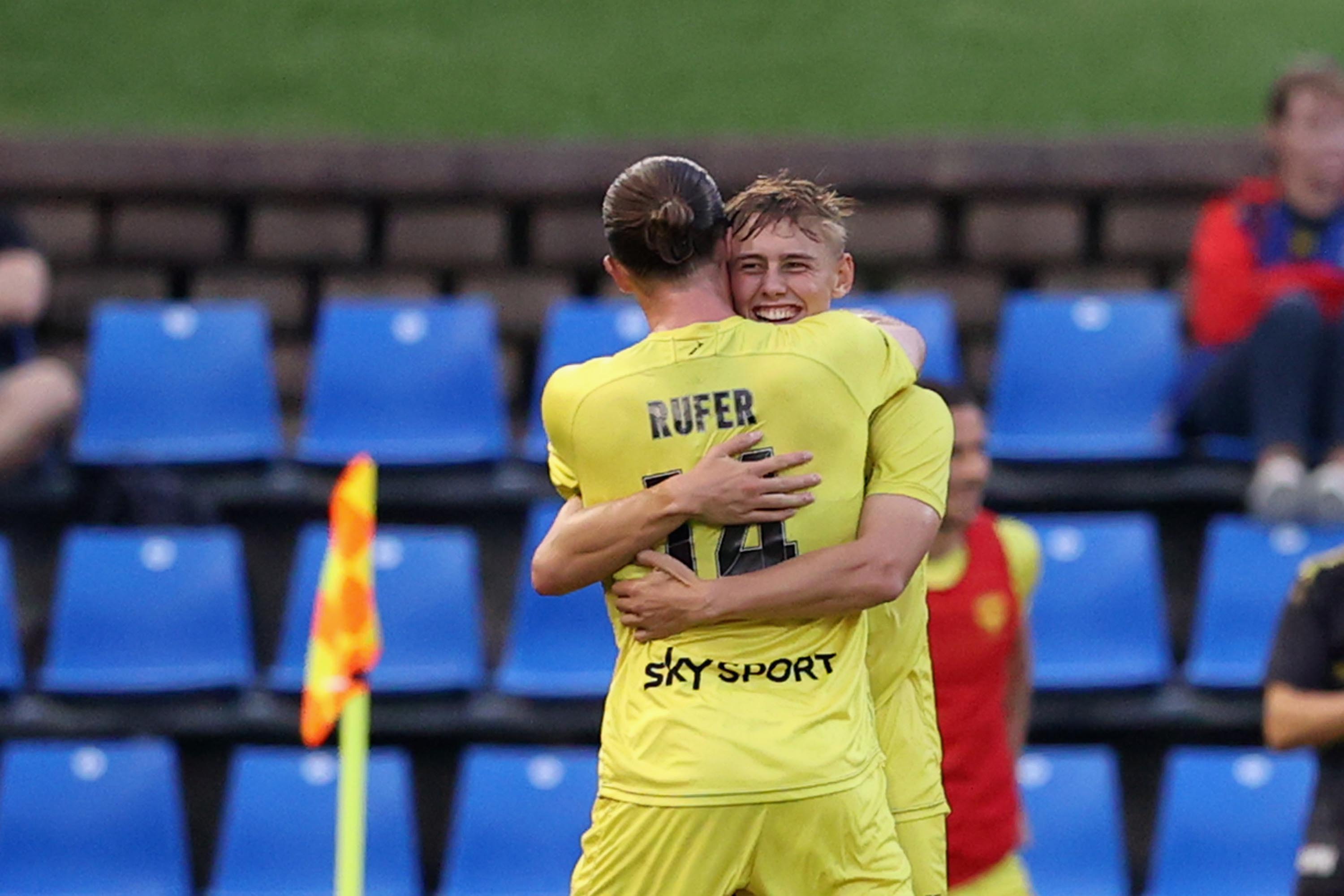 The final thirty minutes would see both Newcastle desperate on attack, and Wellington maintaining their composure and their strong defensive position; Rufer a stand-out in this regard with his disruption in the midfield, picking up multiple interceptions and helping to stymie the Jets attack.

Ball would nearly have his own double at the 82 minute mark, but his close range attempt from the left of the box would be unable to connect.

Sail would make a trio of solid saves in the final 15 minutes, and the Phoenix would hold on for a deserving 2-0 win; Wellington displaying an economy to their attack with six shots (three on target) resulting in two goals scored, versus the Jet’s 18 goal attempts (four on target).

After the match, Phoenix coach Ufuk Talay would have praise for his team’s character and defence; as well as the efforts of his two goal scorers.

“I think the boys showed a lot of character tonight, they were very disciplined and they defended very well – Newcastle had a lot of ball, but not in areas where they could hurt us,” said Talay.

“I thought he [Bally] was exceptional tonight, the amount of work Bally does on and off the ball especially; it’s always nice for your strikers to score, and I’m happy that he’ll grow from that.

“I’m also very pleased for Waino [Ben Waine], I’m sure he’s very ecstatic about the goal he scored, he worked hard for the team as well.

“And players only become better if they play games, and we’ve given Waino the opportunity with the injuries he’s had and I think he’s done a great job for us.”

Talay also reflected on what the players have been through recently – and how they have handled it – with the hope that it builds momentum for the games in March.

“It’s been tough; the boys have played three games in seven days, so the effort and the energy they put out tonight shows a lot about this team and about their character – and the direction we want to head into.

“Obviously a team lifts the sprits of the team and builds confidence, three points was the most important thing tonight, and that’ll build confidence for the players in the next games.”

The Phoenix now return home for their next match, against Perth Glory on Sunday 7 March. It will be Wellington’s first match of the season against Perth, who are currently sitting in sixth place thanks to a current three-match winning streak.