History will be made on 3 December 2021 when the Wellington Phoenix plays its first ever W-League match in Australia, taking on the Western Sydney Wanderers in an exciting double-header event.

“The League is extremely grateful for the sacrifices that Wellington has made – and continues to make – in its re-location and separation from family and friends in order to compete in the Leagues,” says O’Rourke.

Following the draw announcement by APL today which stated that the A-League and W-League seasons will now kick off on 19 November and 3 December respectively, the Phoenix can confirm it will play all A-League and W-League matches on Australian soil until at least January 2022, due to the current Covid restrictions.

These restrictions also mean that both squads will play all of their matches within New South Wales during this time – against other NSW-based Clubs – with the Phoenix’s base of operations and temporary home venue yet to be confirmed.

The Phoenix A-League season commences on Sunday 21 November with a must-see match versus Macarthur FC at Campbelltown Stadium – one of four away games the Club will play in the first six weeks of the 2021/22 season, alongside two designated home matches.

Meanwhile the Phoenix Women’s side will play their first ever match on the opening night of the W-League competition, facing off against Western Sydney Wanderers on Friday 3 December. That match, along with their three other matches scheduled in the initial draw, will all be played as double-headers with the Phoenix men’s team.

Both Phoenix squads are expected to travel to New South Wales at the end of October as they continue preparations for the start of their seasons.

Wellington Phoenix General Manager, David Dome says that the Club has been preparing itself to be based in Australia for a portion of the season, due to Covid and the current lack of a Trans-Tasman bubble.

“As a Club we’ve learnt over the past two seasons to be as adaptive and flexible as possible, especially with all the challenges that Covid has thrown at us,” says Dome.

“We always knew our W-League side would be based in Australia for their inaugural season, and now we can confirm our A-League will spend the first six weeks of the season in Australia as well – with an eye to returning to New Zealand in the new year to play our remaining home matches.

“As with previous seasons, this isn’t an easy decision on the players, coaches and staff to have to live out of a suitcase for this amount of time, but that’s the environment we’re living in at the moment – as always, I am sure all our fans will join with the Club in thanking them for their commitment to the Phoenix and its supporters for the sacrifices they continue to make by doing this.”

APL Commissioner of Leagues, Greg O’Rourke said that the Leagues and Phoenix were working closely together to ensure the Phoenix can return home as soon as possible.

“The League is extremely grateful for the sacrifices that Wellington has made – and continues to make – in its re-location and separation from family and friends in order to compete in the Leagues,” says O’Rourke.

“We will continue to work closely with Wellington to ensure their return to New Zealand as soon as practically possible, so that a normal home and away season can resume.”

The New Zealand broadcaster for these matches will be announced at a later date. 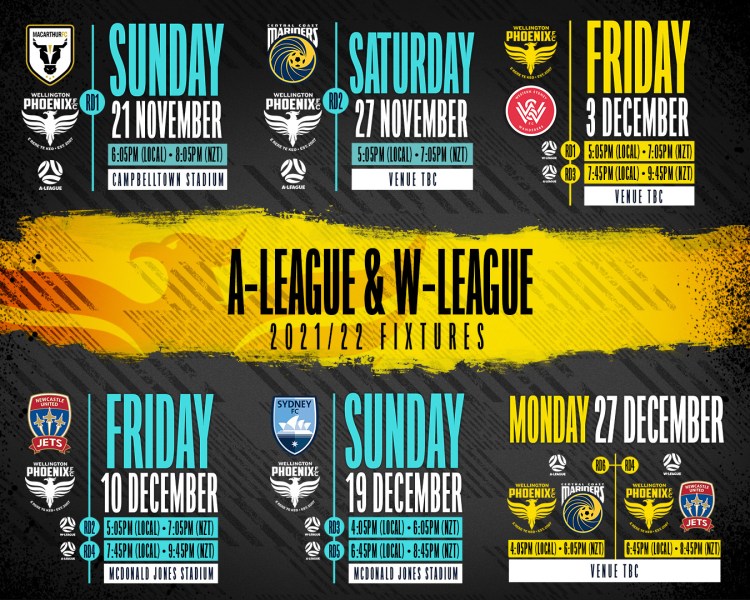