Wellington Phoenix To Bring Stadium Experience Back to Wellington This Saturday

The Phoenix have come up with an innovative way to provide its Wellington fanbase with a stadium-style atmosphere for this Saturday’s match, with the Nix Stadium Experience.

WATCH: Matti Steinmann answers your questions in our latest Q & A

On Saturday 25 July, the third-placed Phoenix play against Adelaide United in their third match of the Hyundai A-League season re-start.

With all matches being played in New South Wales, fans have been unable to watch the team play live at Sky Stadium since March this year – and Wellington Phoenix General Manager David Dome says the club was eager to provide an event which gives fans what they want.

“We ran a fan event at The Churchill for our Sydney match which sold out, but for our first ‘home’ match of the season re-start we wanted to do something bigger and better for our fanbase – we wanted to re-create the atmosphere of Sky Stadium in an indoor setting.”

Based at the Harbourside Function Centre on the Wellington waterfront, the Nix Stadium Experience will feature New Zealand’s largest indoor sports screen, grandstand seating, a kids fun zone with inflatable goals and much more.

Dome says the club has been working hard to provide “all those things that make watching the Phoenix fun at the stadium.”

“Fan engagement is an important part of our match day experience, everything from the stadium announcer and big screen replays to the half-time activations and our mascot Nixie engaging with fans.

“We’ll be providing all of these things on the night, with Sky Sport also there doing their live coverage of the event and plenty of fun and interaction planned for the 300 fans who attend.

“And of course we’ll have a massive tv screen to watch the match on thanks to the team at AV Media, it’s going to be incredible – the next best thing to actually being at the stadium for a Phoenix match.”

The event is a joint partnership between the Phoenix and its valued partner Kapura, with support provided by AV Media, Fortune Favours and Hell Pizza.

The Nix Fan Experience is being held at the Harbourside Function Centre on Saturday 25 July; doors open 5pm for a 7pm kickoff.

Tickets are limited and start from $15 for children and $25 for adults – available here. 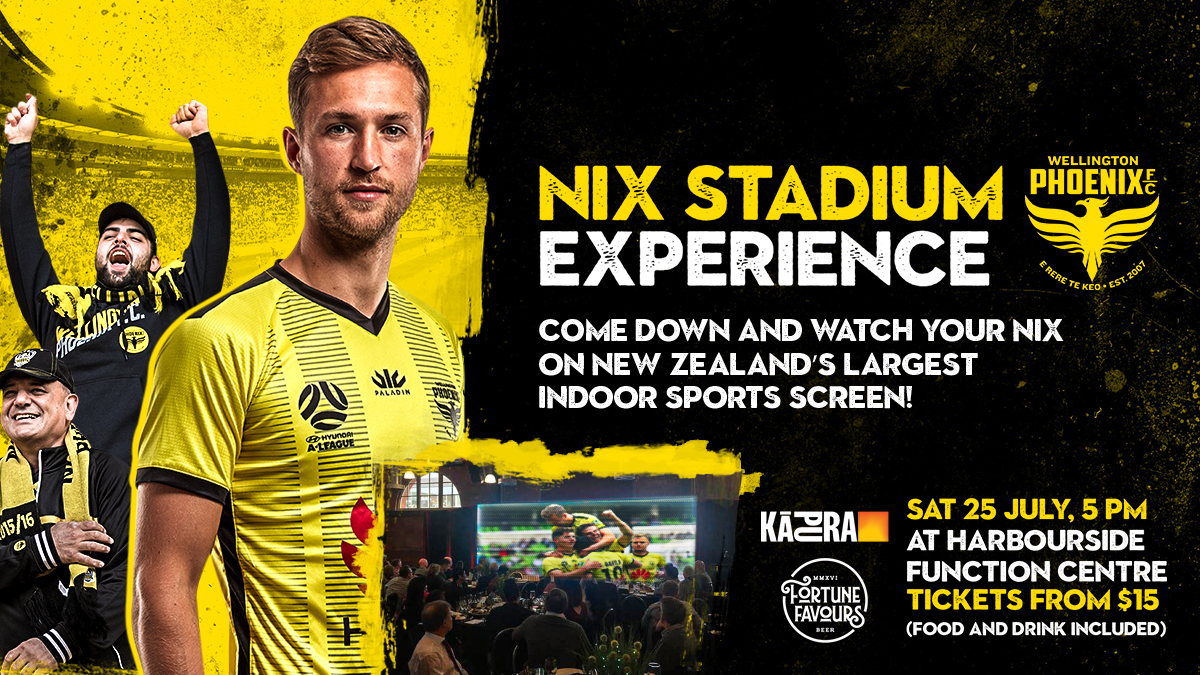