The Wellington Phoenix will play the most important game ever in the Club’s regular season history when it takes on Sydney FC this Sunday at Westpac Stadium.

A victory over Sydney FC will secure the Phoenix second place in the regular season and an extremely valuable pass into the second round of the finals series. This comes with it a much higher chance of the Phoenix making its first ever A-League grand final.

Football Federation Australia has said that should the Wellington Phoenix qualify to host a Grand Final, it will be played at Westpac Stadium.

Wellington Phoenix General Manager David Dome said that the Sydney match is takes on huge significance in the context of the finals series.

“If we beat Sydney we go straight through to the semi-finals will be a huge boost for the Club.

“No one has won the A-League from outside the top 2 at the end of the regular season – this is our chance to finish in the top two and give ourselves the best possible chance of making our first ever grand final.

“This game has all the hallmarks of being a classic finals football match with both clubs keen on securing the second position.”

Both those matches were filled with drama and tension with the Phoenix winning both in extraordinary circumstances.

Dome said Sunday’s match promises to have all the excitement of those finals matches.

“There is no doubt to clubs want that second place spot and both will be going all out to get the three points because of the advantage you get from finishing inside the top two.

“The atmosphere at those matches was incredible – this match against Sydney promises to have all that drama and tension as well.

“This game is a huge one for Wellington, for the city and the club and a result in this match sets up us for the best possible chances of progressing well in the finals series.

Head Coach Ernie Merrick said games like this are what football is all about.

“We have played 26 games to get to this point and Sunday is going to be very exciting,” Merrick said.

“The win over the Mariners was dramatic and it was our supporters that got us over the line for a 95th minute win.

“When we were 2-0 down they never stopped chanting and singing and hopefully we can repay them by producing something special against Sydney.”

Tickets can be purchased from Ticketek here: http://premier.ticketek.co.nz/shows/show.aspx?sh=PHOENIXH15

Statistically, the second placed team has a 70% chance of winning the A-League

In elimination final 1 in season 2009-10, the Wellington Phoenix beat Perth Glory 4-2 in a dramatic penalty shoot-out.

Statistically, the second placed team has a 70% chance of making the Grand Final 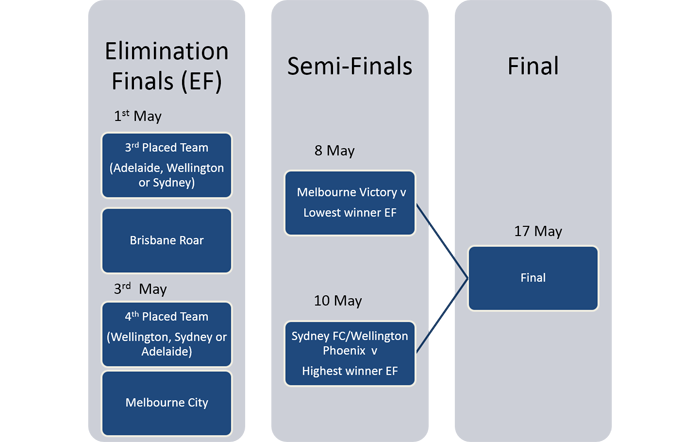