Brendon Santalab’s first-half brace sealed second spot and a return to the AFC Champions League for Western Sydney with a 2-0 win over Wellington Phoenix on Sunday.

Romeo Castelen assisted both goals in the final 15 minutes of the first-half as Wanderers locked up a home Semi-Final.

Michael McGlinchey and Roly Bonevacia both hit the post for Wellington but the hosts struggled to truly trouble the visitors in the final games for retiring stalwart Ben Sigmund and Melbourne City-bound Manny Muscat.

1-0 Brendon Santalab (31’) – Romeo Castelen breezed around Alex Rodriguez on the right flank and spotted the near-post run of Santalab, who somehow squeezed the ball home under heavy attention from Ben Sigmund.

2-0 Brendon Santalab (44’) – From back to front in a flash as Castelen again beat a challenge before laying off a pass for Santalab. The striker this time flashed a hot finish across Glen Moss and into the bottom far corner. 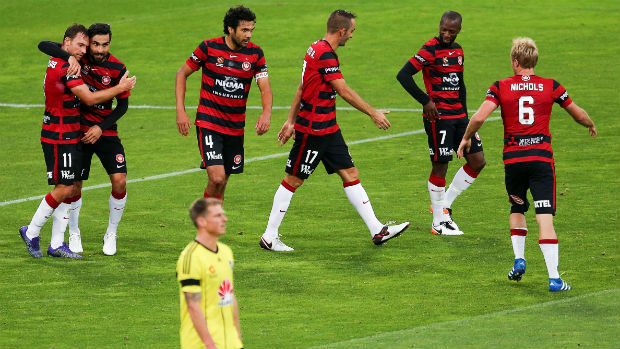 Andrew Redmayne’s pair of saves just prior to Santalab’s opener denied Wellington a goal in their most productive period of the first-half and set the platform for Western Sydney’s match-winning burst.

There was little more Blake Powell could have done with his goal-bound 30th minute shot, but it still wasn’t enough to beat a leaping Andrew Redmayne. The 27-year-old’s full-stretch effort to tip over the crossbar was as impressive as it was important.

Two departing defenders and a midfield ripe for regeneration is just the invitation Ernie Merrick needs to inject some more speed around the pitch. His side simply couldn’t cope with the pace and trickery of Romeo Castelen, who supplied both first-half goals.

Western Sydney Wanderers are back in the Hyundai A-League Finals Series, returning to the AFC Champions League and will have another chance to farewell Pirtek Stadium in its current form with a home Semi-Final.

Tony Popovic’s side earned second place with a hard-fought three points and can now look forward to a week off before hosting the highest-placed qualifier for a place in the Grand Final.

Wellington Phoenix fell short in their bid to fittingly farewell the retiring Ben Sigmund and close their season in ninth, a disappointing from last season’s fourth-place finish.