Sydney FC’s finals hopes have been dealt a big blow after an energetic Wellington Phoenix stunned the hosts 3-1 at Allianz on Saturday.

In seventh place, Graham Arnold’s men were desperate for three points to keep pressure on Perth Glory in sixth (who were playing hours later against bottom side Mariners).

But conceding three goals in a blistering first half by Ernie Merrick’s men effectively ended Sydney’s chances of getting anything out of this clash.

The Sky Blues – with an Arnie rocket ringing in their ears – took the game to the visitors in the second half, but it was too little too late in the end.

And as if the day wasn’t bad enough, key Sydney midfielder Milos Ninkovic went off in the first half with a leg injury. The Serbian joins skipper Alex Brosque on the injury list at Moore Park on a bad day for Sky Blues fans.

For Phoenix’s 20 or so travelling fans, it was a rare joyful day for them and their club.

Danger man McGlinchey’s cross wasn’t cleared and it was Powell the former Sydney FC man lurking in the box who made his former employers pay.

A through ball from Bonevacia was inch-perfect, it found Watson and the big man curled a beautiful side-footer past Janjetovic.

McGlinchey was the instigator, his ball found Watson, the striker scuffed his effort and Bonevacia was clinical enough to make it three. 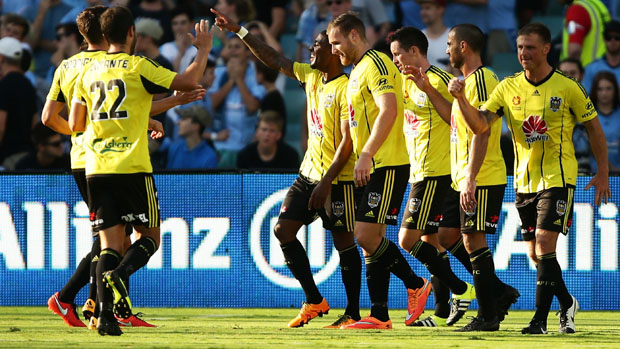 After Grant surged forward on the left and found Stambolziev he crossed, Moss didn’t clear with Holosko profiting making it 1-3.

McGlinchey’s midfield promptings and skilful lead-up play were a delight. No doubt Kosta Barbarouses will be looking forward to playing alongside the classy midfielder next season.

Sky Blue Milos Ninkovic went down clutching his lower leg and was subbed off in some distress on 25 minutes.

With key injuries and an ACL campaign concurrent, Sydney FC’s ability to make the six looks perilous. The team needs a circuit breaker in the A-League: they are looking flat and Graham Arnold needs to find a solution. Now.

For Phoenix, their finals hopes are over but that’s eight goals in two visits to the Harbour City after their recent 5-2 win over Wanderers at Pirtek.

The Kiwis simply love being in Sydney. Though their fans will be wondering why they can’t play like this every week.