Adelaide United have surged to the top of the Hyundai A-League table after easily accounting for Wellington 4-0 on Saturday night.

Two first-half goals at Westpac Stadium did the damage with Dylan McGowan adding his name to the long list of Reds’ scorers this season and Stefan Mauk calmly slotting a second for his hometown club.

Bruce Djite registered his fifth strike of the campaign at the start of the second half to put the result beyond doubt with Pablo Sanchez icing the result close to full time.

The three points sees the Reds move a point ahead of the Wanderers and Roar, becoming the fifth side to lead the competition this season and extends their record unbeaten run to 14 matches.

A listless performance from the home side all but extinguished their finals aspirations after nine goals in their last three matches had sparked hopes of a revival. 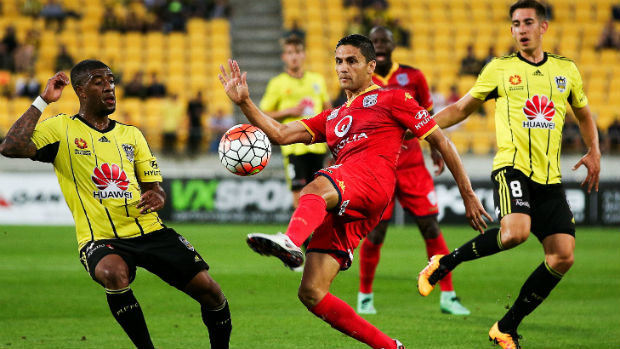 0-1 McGowan (31’) – The Reds opened the scoring from a set-piece with McGown getting on the end of a corner to register just his second ever A-League goal. Jordan Elsey headed Marcelo Carrusca’s delivery back across the face of goal with McGowan free to dispatch the ball past Glen Moss from close range.

0-2 Mauk (41’) – Carrusca was the architect as Adelaide doubled their advantage following a swift counter-attack. The Argentine streaked down the sideline on the break before picking out Mauk with a perfectly weighted through ball. The Olyroo took a touch and fired past Moss with an assured finish.

0-3 Djite (49’) – Any hopes of a revival from the Phoenix in the second stanza were swiftly snuffed out shortly after the re-start. Carrusca picked out Craig Goodwin with a beautiful diagonal ball from half way, with the Reds flyer squaring the ball first time from the by-line for Djite to hammer home. 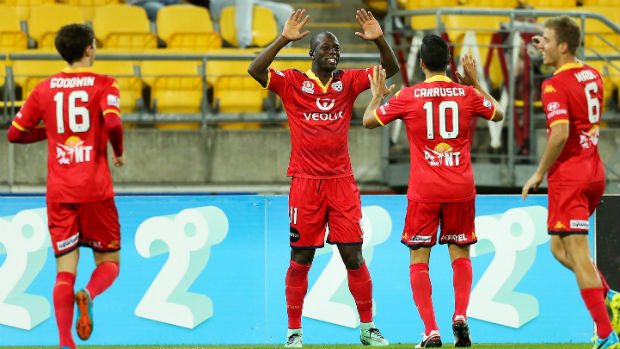 0-4 Pablo Sanchez (90’) – The substitute completed the scoring in the shadows of full-time to complete a convincing performance from the visitors. The Spaniard charged onto a long ball from Cirio, firing through the legs of Moss, but his celebration was muted after picking up a niggle with his finish.

Adelaide’s Sergio Cirio produced one for the bloopers reel when he inexplicably missed the ball attempting to make a clearance out of defence. Roly Bonevacia was on hand to pounce but couldn’t pick out a teammate with his square ball to open the scoring.

The Reds were forced into an early change when Tarek Elrich was forced off with a leg injury inside 15 minutes. Iacopo La Rocca was his replacement, as he returned from suspension in a re-jigged Reds backline.

Both keepers were in the firing line throughout the contest with Moss having a collision with Mauk and Galekovic clattering into his post but were able to see out the contest. 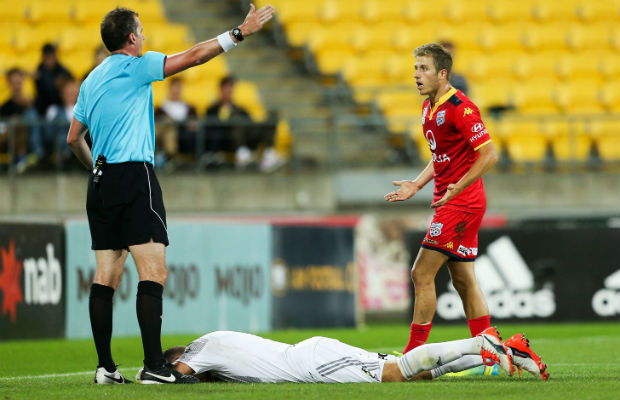 After failing to register a win from their first eight matches this season Adelaide completed their remarkable climb from the cellar to the summit in emphatic fashion.

The acquisition of Stefan Mauk in the transfer window continues to look like a great bit of business and the Reds have now kept a cleansheet in their last three matches.

Wellington went into this match full of confidence having knocked off the Wanderers and City in two of their last three outings.

However despite the return of Hamish Watson and Blake Powell up front the Phoenix were toothless in attack, registering just two shots on target as they looked resigned to missing the finals.