Perth Glory continue to close the gap on the top four after notching a well-deserved 2-1 win over Wellington at Westpac Stadium on Sunday.

A goal in each half had the visitors in control of the match for much of the afternoon, with Thomas Doyle striking late to narrow the deficit.

Both sides went into the match on the back of convincing wins and subsequently named unchanged line-ups for the third “Distance Derby” of the season.

In the end an expert finish from Andy Keogh and a Diego Castro tap-in sealed the points as Glory claimed their eigth win from their last nine starts. 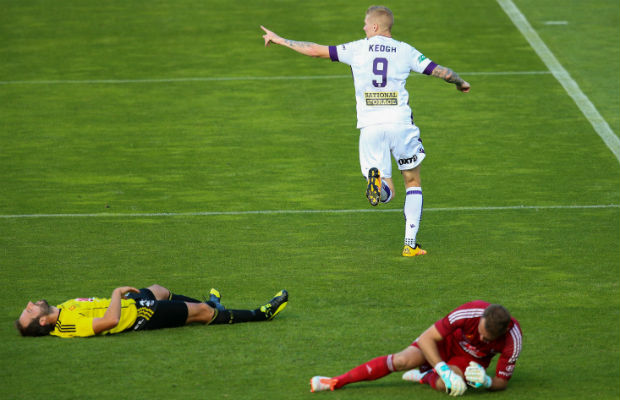 0-1 Keogh (36’) – Richard Garcia was lively down the left flank in the first-half and his enterprise helped open the scoring when he teed up Glory’s in-form frontman. The 34-year-old easily got rid of a couple of defenders and whipped the ball in for Keogh, who was able to finish first-time after getting goal side of Andrew Durante.

0-2 Castro (74’ ) – The ball was threaded through Wellington’s backline allowing Chris Harold to put on the burners and he duly scooted past a couple of defenders. Moss made a one-on-one save and was able to block Harold’s follow up but the ball spilled out for Castro to tap-in for the easiest of finishes.

1-2 Doyle (90+2) – The defender got a late consolation for the home side when he found himself in space in the attacking third in stoppage time. With no support Doyle pulled the trigger, blazing his shot past Ante Covic to deny the visitors a third-straight cleansheet and give the home fans something to cheer.

Glory almost doubled their advantage shortly after opening the scoring but Durante was on hand to clear the chance off the line. Garcia again found space in transition and was able to pick out Keogh in the box. The Irishman cushioned the ball down for Harold but his goal bound header was saved by Durante with Moss also diving across in support.

Glory midfielder Krisztián Vadócz went close to opening the scoring three minutes in with a speculative long range effort. The Hungarian spotted Moss off his line and let rip with an audacious goal bound effort from half-way. Moss pedaled back in a hurry and was able to turn the ball around the posts with an athletic save.

Goalkeeper Glen Moss was in the firing line early as he was forced into multiple clutch saves. The 33-year-old required treatment after a couple of knocks but was able to see out the match.

Phoenix skipper Andrew Durante also showed his commitment to the cause throwing himself about in the first-half. He was subbed at the break for Dylan Fox after picking up a leg injury. 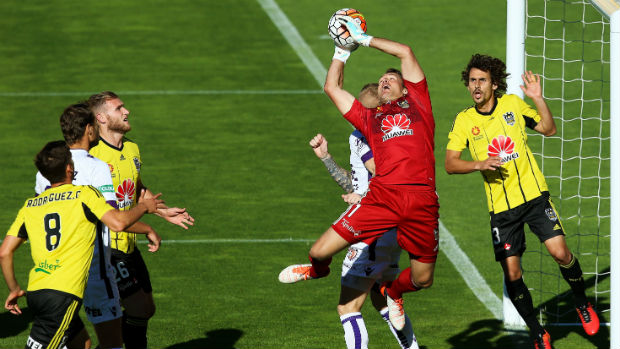 There were ten yellow cards dished out in total as both teams went tit for tat with some heavy challenges but the match never really threatened to boil over. In the end Glory were deserved winners, closing the gap to fourth-placed City to three points and they’re just five off the top.

Wellington toiled hard but this match was indicative of why they’ll not be in the finals this season. The home side lacked creativity and movement in the final third, managing just four shots on goal. They had the mercurial Glen Moss to thank for keeping them in the match as long as he did.