An incredible four-goal haul by Blake Powell has seen Wellington Phoenix produce the upset of the season, crushing Western Sydney Wanderers 5-2 at Pirtek Stadium on Sunday.

In a remarkable individual display, Powell scored the Hyundai A-League’s first hat-trick of the season in an astonishing first 33 minutes as the visitors scored with their only three shots on target.

He then put the icing on the cake with 19 minutes left with his fourth of the match as Phoenix snapped their nine-game winless run in some style.

The Wanderers threatened a comeback as a Mitch Nichols screamer and another to Mark Bridge halved the deficit with six minutes still to play.

But in the final minute Wanderers defender Jonathan Aspropotamitis was sent off for a foul in the box as Michael McGlinchey converted the penalty to end a dramatic game at Wanderland. 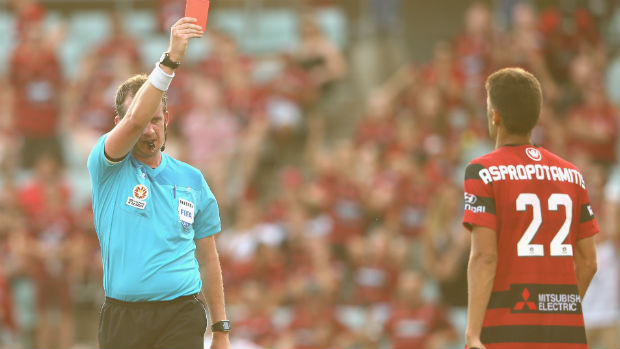 “It’s been a long time coming, we started scoring goals today and we win games. Ernie has showed a lot of faith in me, he’s been giving me some game time so I’m very grateful for that and it’s about time I repaid him with some goals.” – Wellington’s Blake Powell

“All week we worked hard for this game, we prepared well but it was not our day today. They had three shots and got three goals right away and we didn’t put our chances away. It’s very disappointing but we have to look ahead to next week.” – Western Sydney’s Romeo Castelen

0-1 Powell (4’) – A brilliant counter by Phoenix saw Tom Doyle race clear down the left and his cross made it to Powell at the far post, with the striker producing an amazing diving header on the half volley to beat Andrew Redmayne.

0-2 Powell (20’) – Another dangerous cross from Doyle was flicked on by Hamish Watson to Powell on the edge of the box. He took one touch on his chest before ripping a left-foot volley which scorched into the top corner. A cracking strike!

0-3 Powell (33’) – Matthew Ridenton’s searching ball over the top was misjudged by Scott Jamieson, allowing Powell to race in behind and lob the ball over an advancing Andrew Redmayne into the far corner. 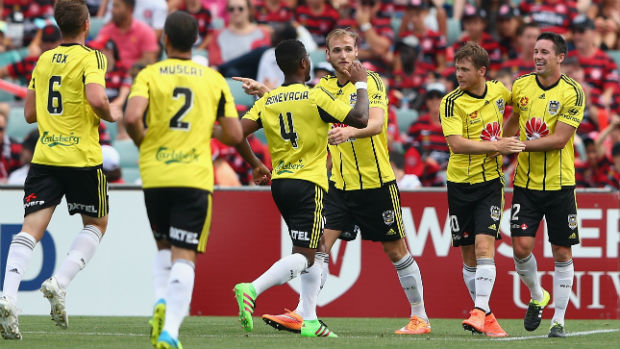 0-4 Powell (71’) – Michael McGlinchey took on and beat Scott Neville down the left before dinking a cross to the far post where Powell was on hand to nod home.

1-4 Nichols (75’) – Nichols tried his luck from 35 yards out with the ball flying like a tracer-bullet into the top corner of Glen Moss’ net. A howitzer.

2-4 Bridge (84’) – Jauhsua Sotirio won possession deep in Phoenix territory and he found an unmarked Bridge just inside the box. He took one touch before firing a low shot under Moss.

2-5 McGlinchey (90’) – Aspropotamitis pulled down Kwabena Appiah in the box for a penalty, which McGlinchey dispatched expertly to Redmayne’s right. 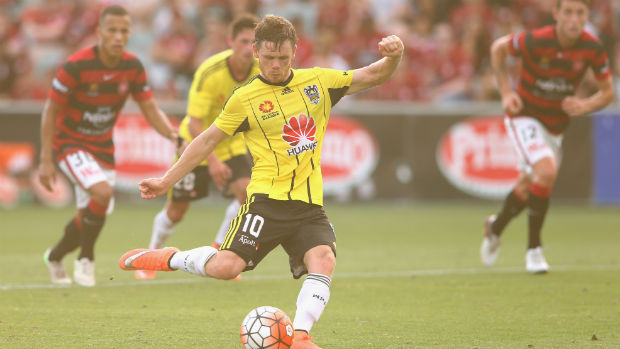 The Wanderers were inches away from scoring an equaliser on 18 minutes when Mark Bridge failed to hit the target with a gilt-edged chance.

Bridge was found inside the box by a pin-point pass by Romeo Castelen. His first touch was excellent and all he had to do was hit the target and surely it would have been a goal.

But the in-form attacker scuffed it wide of the post. In the form he’s been in, you would have expected Bridge to do better. Instead two minutes later Powell doubled Phoenix’s lead at the other end. 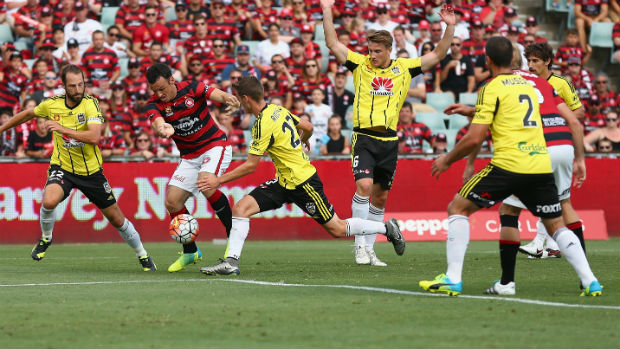 *Powell’s hat-trick (33 minutes) was the second earliest in A-League history, just behind Besart Berisha’s (29 mins) against Adelaide back in 2011/12.

*Powell is just the fifth player in the A-League to score four or more goals in a match, joining Alessandro Del Piero, Besart Berisha, Shane Smeltz and Archie Thompson.

*Five goals is the most the Wanderers have ever conceded in their A-League history.

You would go a long way to see a better hat-trick than the one Powell produced in the first half.

All three of his finishes were top class. An exceptional header, sublime left-foot volley and cheeky lob with his right to complete a ‘perfect hat-trick’.

He capped a dream afternoon with a fourth in the second half. For an ex-Sydney FC player as well, he would have gained extra satisfaction to pull it off against the Wanderers.