Phoenix triumph against Victory in Auckland

Two first-half goals from Roy Krishna and Roly Bonevacia have led the Phoenix to a 2-0 win over Melbourne Victory at QBE Stadium on Saturday.

In what was a bruising affair from the offing it was Wellington that best adjusted to the unfamiliar and tricky surface to move back into the top six.

The reigning champions laid siege to Wellington’s goal after the break as they tried to find a way back into the match but some stirring last ditch defending from the home side saw the match out.

Vince Lia returned to the starting side for Wellington in the only change from last week’s stalemate in Sydney, while Kevin Muscat named an unchanged line-up.

The result was a great reward for Glen Moss who was celebrating his 100th match for Wellington – and had to be at his best to repel a second-half Victory onslaught.

1-0 Krishana (18’) – An attacking foray from Phoenix saw their Fijian striker played through on goal in the centre of the park. A poor first touch from Krishna as Danny Vukovic loomed appeared to have squandered the chance, however the 28-year-old managed to squeeze a shot past the Victory goalkeeper at his near post to open the scoring.

2-0 Bonevacia (44’) – Krishna was again in the thick of the action just before the break when he burst forward from midfield before looking for support. The Fijian found Michael McGlinchey on the left who played the ball back to his teammate in front of goal. Krishna was unable to bring the ball under control but Bonevacia was on hand to lash the ball home. 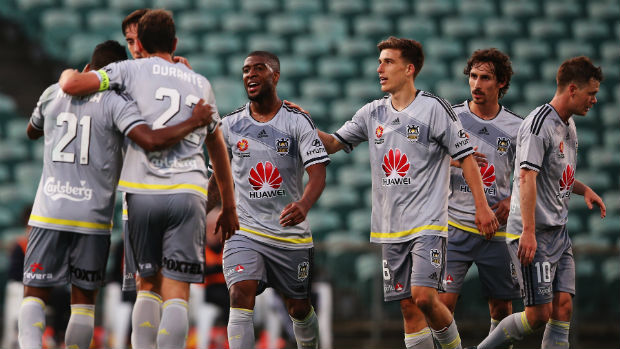 Victory’s Fahid Ben Khalfallah had the ball in the back of the net ten minutes into the second half as Victory tried to get a foot-hold on the match. The Tunisian shot from distance, the ball taking a bobble as it whizzed past Besart Berisha and Glen Moss and inside the back-post. Berisha, who was in an off-side position, was judged to have interfered with the play and the would-be goal was struck off.

The win sees Wellington Phoenix stretch their unbeaten run in home games away from Westpac Stadium to 14 matches.

The Victory were kept scoreless for just the fourth time in 26 matches against the ‘Nix.

There were eight yellow cards dished out by the referee in a match that threatened to boil over at times.

Roly Bonevacia was at his fleet-footed best despite the testing surface making it tough for both sides to play flamboyant football. A moment of magic in the first-half saw the Dutchman pirouette his way past two defenders and through on goal. Bonevacia pulled the trigger with just Vukovic to beat but the Victory gloveman was able to glance the ball away for a corner.

Referee Alan Milliner. Taking charge of his 50th match Milliner tweaked a hamstring with 15 minutes to play and couldn’t continue. Fourth official Alex King took over in the middle as the Phoenix saw the contest out.

Victory’s unbeaten run came to a holt at the hands of their former coach as the Phoenix overran the visitors in the first-half.

The combination – and goals – from Bonevacia and Krishna continues to flourish for Wellington, while the bounce of the ball just didn’t go Victory’s way.

While both coaches may question the state of the pitch it would be hard to deny Phoenix were deserving winners.