Still buzzing from his Rio Olympics campaign, Phoenix striker Roy Krishna is targeting a top-two finish for Wellington in this season’s Hyundai A-League.

With a week to go before Ernie Merrick’s men open their campaign for Season 2016/17 at home to title favourites Melbourne City, Krishna is happy to talk up his team’s chances.

And with what appears a deeper squad than last season to cover for international commitments, there’s a spark of confidence in Wellington.

“We’ve got a lot of strikers now and our midfield is incredible and Marco Rossi at the back is incredible. He’s played in a huge league in Italy and you can see that,” the Fijian striker told reporters on Friday.

“We’ve got great depth… back of your mind you want to make the top two and hopefully win the league.

“But you want to target top two.”

And the livewire striker was upbeat about one of Ernie Merrick’s big new acquisitions.

“Kosta [Barbarouses] I know already, and Gui’s [Finkler’s] passing through, you just need to be in the right place and the right time.

“It kind of pushes me more to give to the team in training you can see everyone fighting for their spot.” 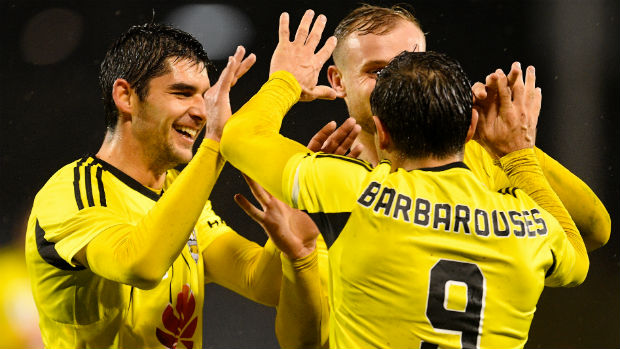 Krishna is part of a very exciting front five in Wellington.

He’s joined by Hamish Watson, Barbarouses, Finkler and Michael McGlinchey plus there is new striker Adam Parkhouse from Australia’s NPL.

“With the signings we’ve had, with the pace up front it’s going to be an exciting season,” said Krishna, who added he learnt a lot from playing with the “big boys” at the Rio Olympics.

Krishna famously scored his nation’s first goal at an Olympics in a campaign in which they faced Germany, Mexico and Korea. His headed goal against the Mexicans was a classy effort and one that made headlines around the world.

“To see the pace [of football at the highest level] it’s something huge for me to learn from and hopefully I can show that with the Wellington boys,” added Krishna, one of the fastest players in the league.

With a number of All Whites on international duty, next week’s Hyundai A-League opener against City on October 8 will be a good gauge of the Phoenix squad’s depth.

And even though Tim Cahill won’t face Krishna’s side on October 8 – the superstar will also be on Socceroos duty – the Fijian is excited to see him in the league for his own reasons.

“Obviously he’s incredible what he’s been achieving and to have him in this league is huge, and personally [because] he’s from the islands as well [Samoa].

“I’ve been watching him in the Premier League and in the USA so it’ll be disappointing not to play him in the home game [next week] but when we play in the second game it’ll be something important.”