New Zealand U-20 coach Darren Bazeley has named an experienced squad to contest the FIFA U-20 World Cup in the Korea Republic this month, including six players from within the Wellington Phoenix senior or development squads.

Logan Rogerson, James McGarry and Sarpreet Singh – who all made appearances in the A-League this season – are joined by Academy graduates Jack-Henry Sinclair, Luke Johnson and former Academy graduate Joe Bell, with U20s captain Liam Wood narrowly missing out.

Bazeley’s 21-strong squad includes five senior All Whites – Clayton Lewis, Moses Dyer, Henry Cameron, Rogerson and Dane Ingham – as they look to surpass the achievement of the 2015 squad who progressed to the Round of 16 in the tournament staged in New Zealand.

Bazeley and his support staff staged a final training camp in Auckland last week with a greater squad of 30 to complete their preparation for the tournament which will be staged from 20 May to 11 June.

The head coach, who led the New Zealand U-20s to a comprehensive victory of the OFC U-20 Championship in Vanuatu last September, said the depth of quality, and the various locations around the world of the eligible players in the group, made it a difficult squad to select.

“We are really happy with the squad we have named,” said Bazeley. “It is an experienced and exciting squad, we have some good players and we are ready to go and take on this big challenge.”

Bazeley said the training camp last week was about getting the potential identified players all together, checking their fitness levels and working on the style of play the team is looking to play at the upcoming FIFA U-20 World Cup.

“The week really did help with making our final choices. There were some really tough decisions. We have a strong squad who all performed well and worked hard throughout the week. It is always hard when players are so close to making the final World Cup squad and to then have those last tough conversations.”

Bazeley expected the All Whites, three of whom who were part of the All Whites squad who managed two wins over Fiji in the FIFA World Cup qualifying in March, would help lead his team on the world stage.

“They bring experience and they are all very good players,” said Bazeley who is also the All Whites assistant coach.  “Hopefully what they bring to the squad will rub off on the other players. Clayton Lewis is now an established All White, Moses Dyer has consistently been selected, Dane Ingham just came into the squad and Henry Cameron and Logan Rogerson have previously been part of the senior team.”

Bazeley said this squad also has a number of good players from around the world who are aspiring to get to that level. Noah Billingsley, who performed so well at the FIFA U-20 World Cup in New Zealand and scored in the historic 5-1 win against Myanmar, is a good example. There are also 11 players in the squad who represented New Zealand at the FIFA U-17 World Cup in 2015 including Sunderland FC Premier League Goalkeeper Michael Woud. Add to that Nike Academy graduate Myer Bevan who was Player of the Tournament and top scorer in the OFC U-20 Championship last year and it is clear that it is an exciting squad.

Bazeley said it has been a long process getting to this point.  They have been on this task of selecting this squad for almost two years. They held two camps in July and January, monitored the players’ performances and scouted around the world to get the balance of their squad right.

Bazeley said the excellent performance of the NZ U-20s at the last FIFA World Cup adds some pressure and expectation, but that is an exciting challenge for this group to overcome.

“We want to be better than the last group, we have to continue to improve and move forward in the right direction, that’s the challenge for this group,” said Bazeley.

The New Zealand U-20s depart for China tomorrow where they will have an eight day training camp. They play games against the Mexico U-20s on 13 May and a local Chinese club side on 16 May before heading to Korea on 18 May.

New Zealand U-20 squad to contest the FIFA U-20 World Cup (Club, NZ unless noted) 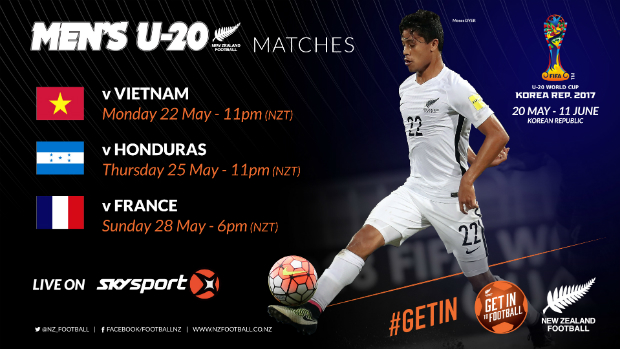