A key piece of the Wellington Phoenix’ playing roster has been filled with the signing of experienced Italian defender Marco Rossi.

Rossi, 28, has played in both Serie A and Serie B and is part of a wider investment programme into the Club to meet core strategic objectives.

Phoenix General Manager David Dome said Rossi’s signing was a key part in the club having a competitive squad for the 2016-17 season.

“The Club has materially increased its investment in a number of areas this season and the signing of Marco Rossi is the third significant investment in the playing roster.

“The Club is committed to an exciting and attacking brand of football and this is being backed up by investment in quality players,” Dome said.

“Marco complements the broader strategy of fielding a very competitive squad,  winning games on the field and growing the Phoenix brand off the field.

The Club has been working on getting the defender to the Phoenix for over three months, with patience paying off for Head Coach Ernie Merrick.

“I’m sure the time spent on signing Marco will be well worth it,” Merrick said.

“As a centre back it is very much about reading the play and starting possession from the back and Marco has the experience to do that.

“Centre back is all about judging the offside line and I believe Marco and Dura will form a good combination.

“No other country in the world has developed defenders like Italy and our young players like Dylan Fox can learn a lot from someone like Marco.” 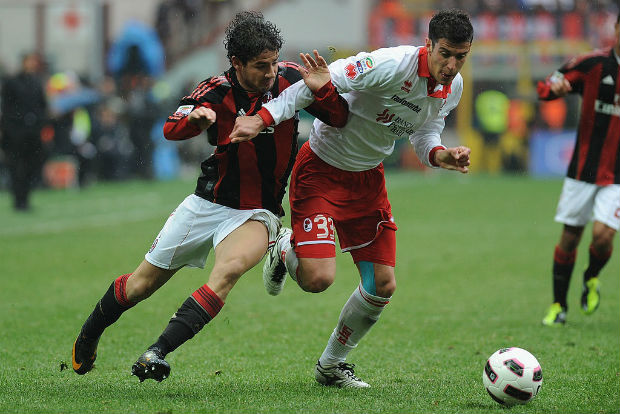 Rossi’s signature won’t be the end of the club’s signings with Merrick looking for a fullback, defensive midfielder and a back-up striker.

“We will take our time in making further acquisitions but they will be completed before the season begins” Merrick said.

“It is a bit different that is for sure,” a smiling Rossi said.

Asked why he had decided to join the Phoenix Rossi said he felt it was time for a change and wanted to try something different.

“I spoke to (former Socceroo) Vince Grella and he said it would be good experience to come down here”.

“I also talked to (Socceroo goalkeeper) Mark Birighitti who told me a lot about the A-League and was really enthusiastic about it.

“I took my time before making the decision because going to the other side of the world is a big change.”

Born and raised in Parma, Rossi said he had been training hard for the last three weeks as he realised he would be a bit behind the Phoenix players when he arrived.