Phoenix breeze past City in Wellington

​Wellington Phoenix defeated Melbourne City 2-1 in an entertaining clash with all goals coming in a frenetic opening 20 minutes on Friday at a windy Westpac stadium.

Phoenix’s striking stocks took a blow before kick off with Blake Powell’s injury, but his loss was barely felt early on as the home side got off to a flyer.

Up 2-0 inside the first 15 minutes, it looked they could run away with the game in Andrew Durante’s 200th game for the club.

But the classy Aaron Mooy pulled one back for the visitors just minutes later.

Despite City’s best efforts late in the second half – on a night when the windy conditions made it difficult for the players – Phoenix’s rearguard held off the visitors to record a welcome win. 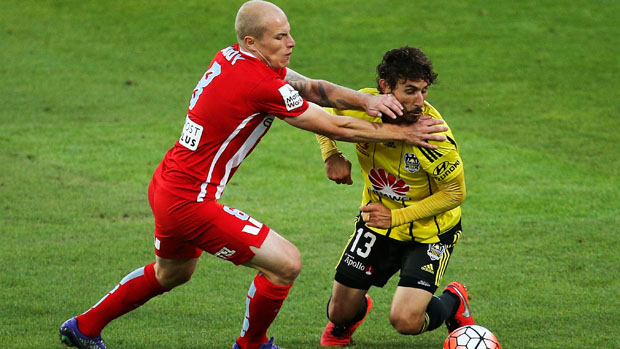 McGlinchey popped up on the left and directed an inch-perfect low ball into the box for Fenton who got between two defenders and slid past Sorensen to open the scoring.

Bonevacia on the right found space to direct his low cross into Ridenton and in similar fashion to Fenton’s opener, he slid home a second past Sorensen.

Muscat into the back of a City player gave City the chance and Mooy stepped up from distance to slam home his free thanks to a deflection off the wall.

Moss’s incredible stop against Fornaroli on 22 minutes was pivotal. One-on-one you’d be certain it was about to be 2-2. But it wasn’t. Moss stood up brilliantly. It proved

The one time  wind didn’t affect Mooy’s set pieces, he slammed a beautiful set piece onto the bar in the second half.

Poor Aaron Mooy’s  set pieces were ruined by the windy Wellington weather. He had to drag over a teammate to help keep the ball still in the blustery conditions.

On the stroke of half time, Sorensen pulled up after he ran out of the box. He was replaced at the break.

But with finals football virtually impossible, thoughts turn to next season with a number of players playing for contracts.

City, meanwhile, will regret their slow start. They could’ve gone equal top with a win in Wellington. They must regroup ahead of Sydney FC’s visit next week.