Wellington Phoenix coach Ernie Merrick never had any doubt his team would find a winner against Perth Glory, even if they did leave it until the last minute.

An attacking Phoenix side dominated Sunday’s match at nib Stadium and it appeared only a matter of time before one of Roy Krishna, Michael McGlinchey or Jeffrey Sarpong broke the deadlock.

However, it was Vince Lia who ensured the Phoenix would return to Wellington with the three points, scoring from a corner kick in the 89th minute to seal a 2-1 victory and claim the first leg of the newly created Long Distance Derby Cup.

Phoenix had more possession (52.2%) and eight more shots than Glory, but Merrick was left with a few heart-in-mouth moments before Lia found the back of the net.

“It gets a bit frustrating at times when we don’t score, like last week (against Newcastle) when we had lots of shots but never scored,” Merrick said.

“I felt we were a bit unlucky not to go ahead in the first half. We conceded a goal, we responded quickly and then we had two or three chances in the six-yard box which we didn’t put away.

“You have to preserve and never give up attacking play. We knew that with most of the attacks from Perth, they would take advantage of set plays so we were in jeopardy with free kicks, corner kicks and that sort of thing.

“We knew what to expect and we determined to preserve right to the end – and it worked for us.”

Merrick said their efforts were particularly impressive given Phoenix captain and defensive mainstay Andrew Durrante was missing in action with a calf injury. 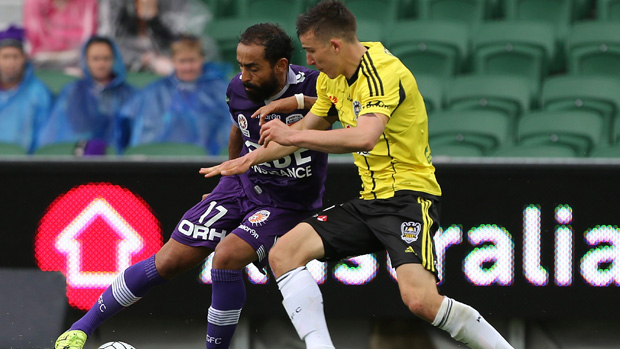 “We got the offside line right and that allowed us to press high and we pressed and kept winning the ball in midfield,” Merrick said.

“Our midfield was once again strong, but it was great to see the backline make up for the loss of Andrew Durrante.”

Phoenix hosts Brisbane Roar on Saturday and Merrick welcomed the challenge of taking on the unbeaten league leaders.