Wellington Phoenix coach Ernie Merrick was left ruing missed opportunities as his side was beaten 2-1 by the Newcastle Jets in their Hyundai A-League season opener in Wellington.

Despite enjoying nearly two-thirds of possession, fashioning fourteen attempts on goal and playing the last fifteen minutes against ten men after Nigel Boogaard was sent off, the Phoenix fell to a third straight opening day home loss.

“The stats show we completely dominated the game,” said Merrick.

“We restricted them to three shots at goal – the goalkeeper made one save and the other two were goals. We dominated possession, we passed the ball around well through midfield, our defence was rock-solid, we played a high line and did everything but finish. But the most important stat is the number of goals you score and we’ve got to improve there.”

David Carney opened the scoring for the visitors before Roly Bonevacia equalised in first-half injury time. Four minutes after the break, the Phoenix had a golden chance to go ahead when they were awarded a penalty, which Roy Krishna was unable to convert.

“You wouldn’t believe the number of penalties we’ve been practising,” said Merrick.

“Roy doesn’t miss them at training. I thought he took it pretty well but it was a really good save from Birighitti. If we’d scored the penalty it might have been a different story. But it’s all about scoring goals.”

“We should be better also on free-kicks and corners. The interesting thing was we got the ball into the six-yard box with pace and we still couldn’t finish it off. Two or three balls went right across the goal-line. I don’t think that could happen again and I hope it doesn’t,” he said.

The Phoenix lost skipper Andrew Durante after just 27 minutes to an aggravation of the calf injury which had him in doubt for the game but Merrick was hopeful he’d be fit to travel to Perth for next weekend’s clash with Glory. 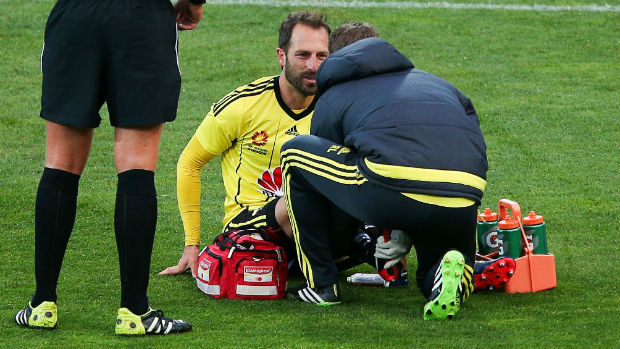 “It usually takes a couple of days to see if there’s any internal bleeding and perhaps a scan to check if it is a tear. Initial indications are that it’ll be okay.”

Merrick also revealed new signing Jeffrey Sarpong had picked up and injury since arriving in Wellington as well as lacking match fitness. The Dutch striker made his Phoenix debut off the bench but was unable to make a major impact.