His upbeat personality has become famous in Wellington, but Phoenix coach Ernie Merrick was struggling to look on the bright side after watching his side fall to a fourth consecutive Hyundai A-League defeat, losing 1-0 at home to Perth Glory.

Chris Harold’s first-half header was enough to grab the visitors all three points at Westpac Stadium on another frustrating day for the Phoenix.

“It’s pretty hard to put a positive spin on it,” sighed Merrick afterwards.

“It’s the story of our season. Lots of passing, lots of the ball in the box, eleven shots to (their) three, seven corners to two and we have nothing to show for it.”

“It’s very frustrating and I have to apologise to our fans,” he said. 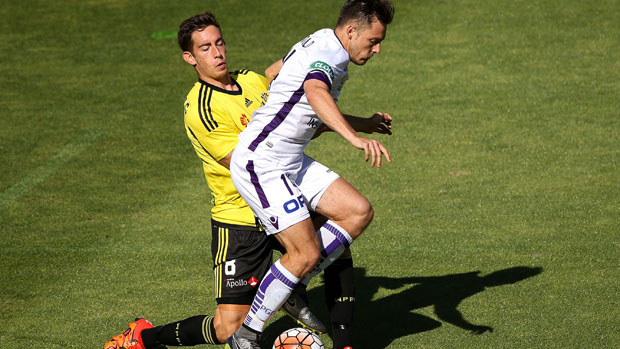 After Harold’s bullet header had put Perth in front midway through the first half, the Phoenix had some good opportunities to square the ledger, none better than a chance for Michael McGlinchey just before the break. With the goal at his mercy, the All Whites midfielder inexplicably placed his shot from seven yards straight at Ante Covic, who was able to scramble it away.

“Look at the chances we missed. There were a couple of clear-cut chances and there’s no excuse for that,” said Merrick.

“We’re doing a lot of things right but our midfield and defence must be very frustrated that (our attack) is not scoring, because when you score, you lift.”

“We can’t do any more at training than what we’re already doing. It really comes down to having quality players in the pointy end of the team. Joel Stevens is getting better and Blake (Powell) is working hard, but it’s not just those two,” he said.

To make matters worse, midfielder Alex Rodriguez was withdrawn after an hour with a suspected medial ligament injury, while fullback Tom Doyle complained of calf soreness after the game.

On the bright side, new Phoenix striker Alex Jones has arrived in New Zealand’s capital from Birmingham City and will be in contention to play next weekend.

“He said after the game there were a few opportunities he’d loved to have been on the end of,” revealed Merrick.

With their playoffs hopes now all but extinguished, Wellington visit the league-leading Western Sydney Wanderers next Sunday.