The Wellington Phoenix have defeated Perth Glory tonight, with a resounding 3-0 win coming thanks to the brilliance of Reno Piscopo, David Ball and Ben Waine, alongside a dominant defensive effort led by goalkeeper Oli Sail.

I think we defended very well, this was probably a game where we had less possession than the opposition; they had very influential players and we nullified the space for them to be influential.

Taking to the pitch in a new red ‘Wollongong Strip’ in honour of Wollongong Appreciation Month, the Phoenix would otherwise field a similar line-up to that used in the last match – the only change being the return of James McGarry to the starting 11 at Joshua Laws’ expense.

The match began with Perth controlling the possession, the visitors with a bevy of attempts on goal in the early going – their first attempt coming from Perth’s Daniel Stynes, a turnaround shot which was blocked by Louis Fenton.

A subsequent attempt by Perth midfielder Brandon Wilson would be blocked by Nix goalkeeper Oli Sail, with a follow-up shot by Andy Keogh sailing high over the net.

Keogh thought that he’d scored at the 18 minute mark, but his goal was confirmed as offside after a VAR check. And after Sail caught a long-range attempt from Perth’s Kosuke Ota, a free kick opportunity by Stynes was wasted as it bounced off Bruno Fornaroli and out of play.

The Nix displayed excellent defensive chops in the first 25 minutes; Tim Payne leading the charge by routinely defending the penalty box with multiple headers, and Alex Rufer a constant shadow on the Glory’s captain Diego Castro.

Despite Perth’s run of goal attempts, the Phoenix would strike first at the 30 minute mark; Reno Piscopo banging home a superb long-distance goal – against the run of play – to put Wellington up 1-0. This was both Wellington’s first attempt on goal in the match and Piscopo’s first goal of the season. 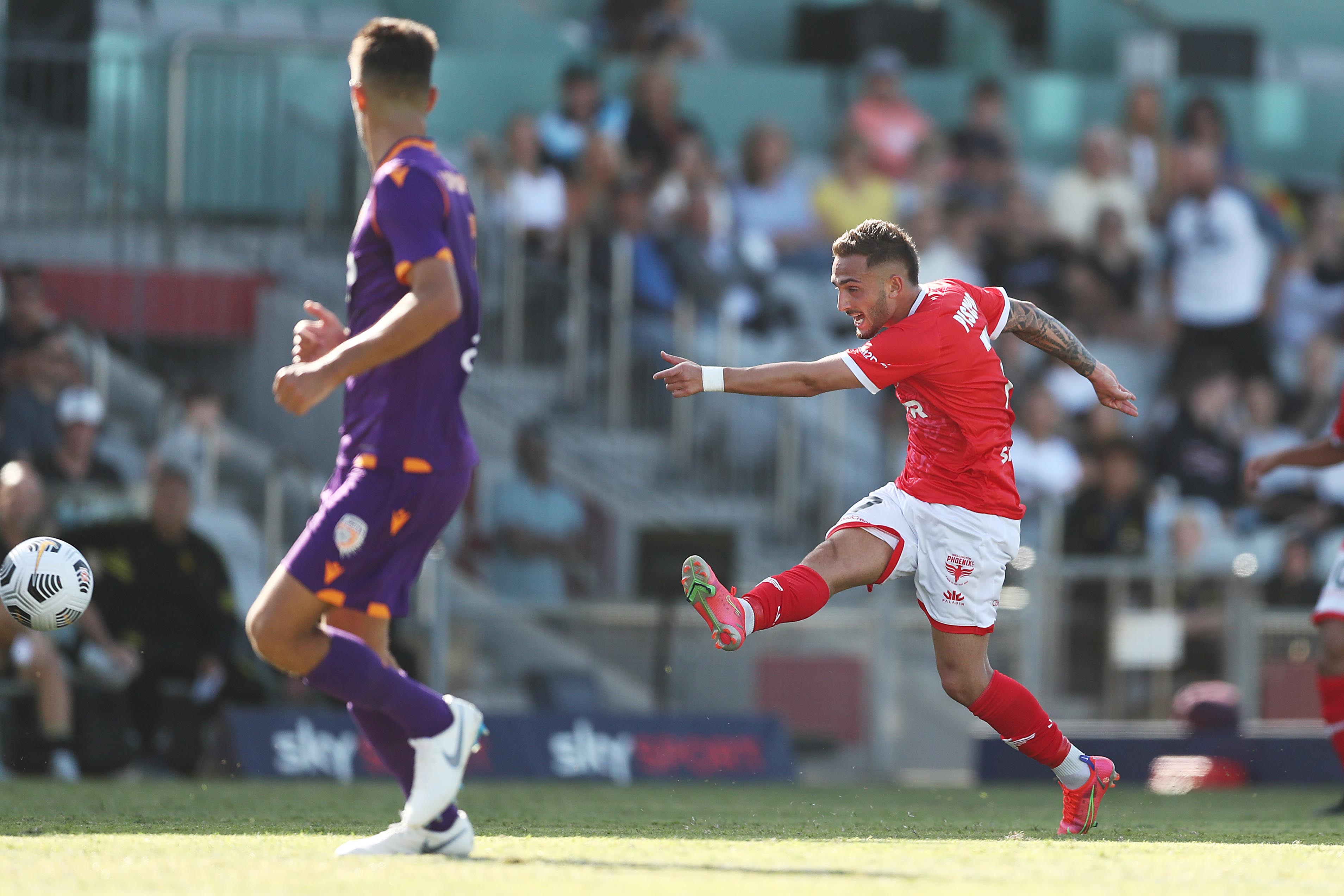 After an attempted equaliser by Castro was punched away by Sail, Wellington turned their defence into offense – Ulises Davila picking Perth’s pocket, getting the ball ahead to McGarry who in turn delivered an excellent cross into the box to a waiting Ball.

Ball slotted the ball home from close range to put the Phoenix up 2-0 at the 35 minute mark; giving Ball both his third goal of the season, and his second goal in two matches since returning from suspension. The first half saw the Phoenix carry a 2-0 lead into the break thanks to Piscopo and Ball; the Nix scoring two goals on two attempts, despite Perth winning the possession battle.

Equally as important as their efficient offense was Wellington’s lockdown defence, particularly from Payne and Fenton to prevent Perth from getting inside the box; Wellington also registering three blocks and three saves for Sail in goal in the half.

The second half began with Perth desperate to bridge the scoring gap; but Wellington’s defence would be up to the task, denying the Glory on multiple occasions. And Ben Waine would put the Phoenix further ahead at the 59 minute mark, a fantastic goal on a setup from Ball – the second goal in as many matches for the 19-year-old – to put Wellington up 3-0.

Down 3-0, Perth’s frustrations was evident; their inability to break through the Phoenix defence highlighted in one particular sequence when Sail made a trio of saves against a desperate Fornaroli. Adding to their misery, a bicycle kick attempt from Osama Malik would be batted away by Sail; the 25-year old goalkeeper doing extremely well to deny a certain goal from Perth.

Piscopo would have a breakaway attempt at 81 minutes, but his long-range strike was blocked by Perth goalkeeper Tando Velaphi. Piscopo’s follow-up attempt barely a minute later was also off the mark; the 21 year old continuing to firmly make his mark on the game.

The Wellington Phoenix would take away a dominating 3-0 win on the night, their first win of the season at their WIN Stadium home and their second win in a row; also their second clean sheet in a row thanks to the heroics of Sail – the 25-year-old keeper making 10 saves and collecting six crosses on the evening.

Not only was this the first time the Nix have scored three points or more in a match this season, but it was also the first time that Perth – currently leading the competition with 19 goals scored – would fail to register a single goal in a match.

“I think we defended very well, this was probably a game where we had less possession than the opposition; they had very influential players and we nullified the space for them to be influential,” said Talay.

“And we were clinical when we got up to the other end of the goal – so for us to it was a win that we needed, our first win at WIN Stadium and hopefully this gives us the momentum to move forward.

“Overall for me, a great solid performance and great character from the players.”

The Phoenix will next face the Western Sydney Wanders on Monday 15 March at Bankwest Stadium, in a re-match of their Match Week 9 clash that saw both teams walk away with a 2-2 draw.