Match Preview: Phoenix Look to Ignite Versus Struggling Melbourne Side

All eyes will be on the Wellington Phoenix as they return to Melbourne’s AAMI Park this Sunday, this time facing rivals Melbourne Victory as they aim for a vital first win.

READ: WELLINGTON PHOENIX SET TO HONOUR VETERANS DURING REMEMBRANCE ROUND

Although they hail from different sides of the Tasman, there are multiple parallels between these Phoenix and Victory teams as they head into Round 5 of this season.

Both clubs have new coaches in Wellington’s Ufuk Talay and Victory’s Marco Kurz, with each coach having placed a focus on bringing in both young and established local players to their respective squads; highlighted by Socceroos duo Robbie Kruse and Andrew Nabbout re-joining the Victory this season and Coach Talay bringing in talented Kiwi youngsters in Callum McCowatt, Ben Waine and others to fill out his promising Phoenix squad.

Both teams reached the top six in the 2018/19 season, with expectations high that they’d be competitive again this year but for a raft of departures at the end of last season – including a pair of well-known personalities in Wellington’s Andrew Durante and Victory’s Kevin Muscat – which meant that both clubs have had to re-tool their squads.

And both have selected proven veterans as newly minted captains this season; Wellington’s top defender Steven Taylor and Melbourne’s striker Ola Toivonen, who both joined their respective clubs last season and more than proved themselves as elite contributors.

Most interestingly, both teams surprisingly currently sit outside of the top six and are hungry to move up the ladder as their new teams continue to gel together.

The Wellington Phoenix have moved on from their contentious result last Sunday, when a stunning VAR decision cost them a draw against Melbourne City at AAMI Stadium. Although it would be easy for them to lose confidence after having a victory snatched away from them in this way, both coach and players are laser-focussed on securing a must-have win against a struggling opponent. Star striker, Gary Hooper, summed it up well earlier in the week when he spoke about the VAR result on Louis Fenton’s alleged handball in Round 4.

“Everyone knew it hit his chest but in the end we lost the game and couldn’t do much about it – it’s a big mistake but we’ve got to try and move on from it because we’ve got a big game on Sunday, probably the biggest game of the season for us.” 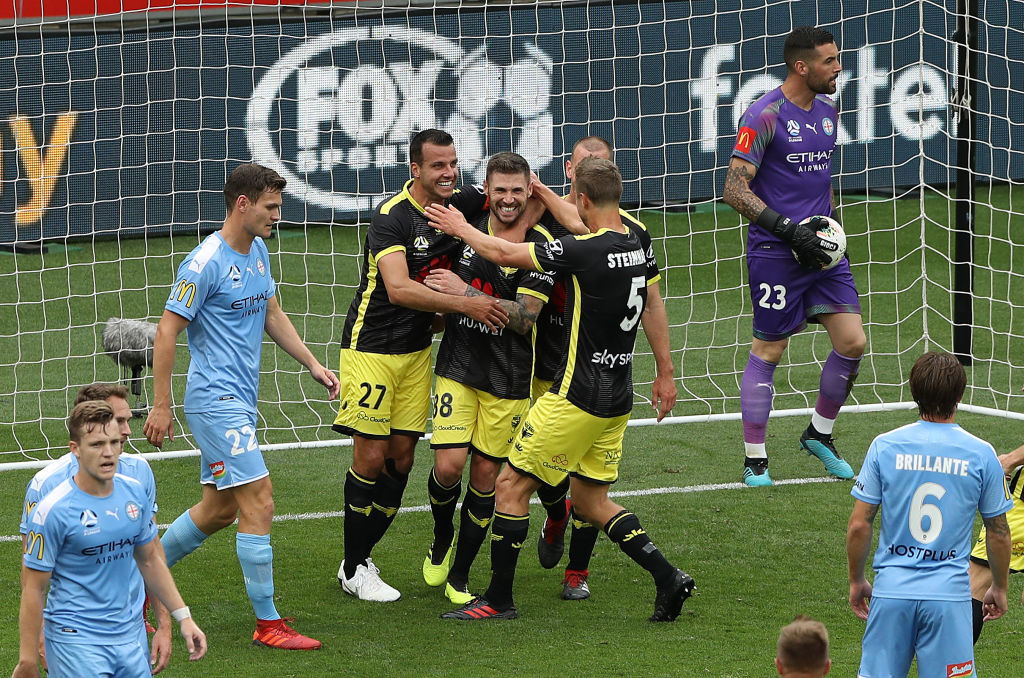 Phoenix fans will be buoyed by Hooper’s strong play in his first start of the season as he bagged a brilliant early goal, showcasing a skill he’s become renowned for during his career – scoring goals. Also scoring for the first time in the Hyundai A-League, and somewhat lost amongst the VAR controversy, was 18-year-old striker Ben Waine; becoming the youngest player to ever score a goal for the Phoenix.

In addition to their consistently strong frontline play, Wellington will welcome the return of 19-year-old Liberato Cacace against Melbourne Victory, as his defensive abilities have been sorely missed the past two matches as he sat out with a suspension. His return to the squad is tempered by Fenton sitting out with a shoulder injury; sustained during the first half of the Melbourne City match (and not in any way aggravated during his spirited post-match interview on Fox Sports).

Also impressing for the Phoenix is German midfielder Matti Steinmann; his 13 tackles won so far this season are the joint-most of any player in the competition.

For Melbourne, this will be their first home match at AAMI Stadium this season after previously playing at Marvel Stadium for their first three home games; two of which they lost and another being a nil all draw. Their only win so far this season has come against the Brisbane Roar in R3.

Victory will rely on 33-year-old Swedish striker Toivonen to score the goals, after his impressive run last season where he banged in 15 goals in 22 appearances – in the process scoring his first 10 goals faster than anyone else in the club’s history. He’s already made two goals and two assists in four matches this season.

The club will rely on new visa players Kristijan Dobras, Migjen Basha and Jakob Poulsen to provide opportunities in the midfield. Coach Kurz will also look to strengthen his defensive structure with the signings of James Donachie, Adama Traore and Tim Hoogland, after the squad conceded 39 goals last season – including an embarrassing 6-1 deficit against Sydney FC in the semi-final.

Injuries to key players Kruse, Nabbout and Hoogland for this round will likely cause Kurz a few headaches as he juggles his lineup to fill in the gaps; it also provides a strong opportunity for an increasingly confident Wellington Phoenix side to dominate their opponents and pick up a deserved first win of the season – in the process washing the foul VAR taste out of its mouth.

This Sunday match is being played as part of the Hyundai A-League’s annual Remembrance Round, which is an important opportunity to remember and acknowledge the service men and women in Australia, New Zealand and around the world who sacrificed their lives during times of conflict. The Wellington Phoenix will wear special Poppy Appeal-themed kits for this match, which will later be auctioned off via TradeMe to raise funds for The Royal New Zealand Returned and Services Association (RSA NZ).

Join the conversation on Twitter using the hash-tag #MVCvWEL

For worldwide coverage, please check out the International Broadcasters showing the game here.