Injury may have denied Winston Reid the opportunity to be there himself, but the New Zealand captain has further enhanced his reputation as a champion of NZ football with the announcement of the Winston Reid Foundation on Wednesday.

Prime Minister Bill English, representatives from Maori Football NZ and players from the Wellington Phoenix were in attendance during an understated but meaningful ceremony at Wellington College, in fitting with the humility of Reid himself.

The All-Whites legend has commited to help fund infrastructure for new football academies, in Auckland and Wellington, as well as a Maori Football Scholarship to help aspiring Maori footballers realise their potential and secure their future through education.

“I don’t think that there’s anything in New Zealand at the moment like it” Reid told the Dominion Post, “You have a youth academy in the Phoenix, but it’s more about saying we know that everyone is not going to make it in football so you have to give opportunities for people in life to succeed.

“That’s going to be one of the big reasons behind it, we want to give opportunities to people that might be in a tough position or they’re in a bit of a struggle really.

“Also, I genuinely want to do something for football in New Zealand. I think there is some raw potential there. We have some fantastic athletes, especially with the Maori and Pacific Islanders, the genes that they have, they’re always quick and strong. Most of them go to rugby or league, so I think one of the big reasons behind it is there are a lot of kids who come from tough areas and this is about giving an opportunity for them and it provides for them.”

Two players currently in the Wellington Phoenix Academy system, Max Mata and Sarpreet Singh, were previously recipients of scholarships funded by Reid, but the club remains eager to expand its support for young Maori footballers, and has pledged to assist Reid in identifying and nurturing aspiring talent from across New Zealand as well as hosting future scholarship recipients within their Academy programs.

Phoenix player Logan Rogerson was on hand at the announcement and spoke of his enthusiasm to see more Maori kids provided with a possible pathway to professionalism.

“I remember back to that 2010 World Cup, watching him being Maori, south Auckland, and now he’s playing in the Premier League. I’ve played with him in the All Whites and I’ve learnt a lot off him and it just shows, Maori, Polynesian, whatever, you can play at the top level. Your race doesn’t define how far you can go in the game.

“Back home, especially where I’m from which is real Maori-based, I’ve got a lot of family and friends who could benefit from something like this. Sometimes they hang out with the wrong kind of people, which is not good to see, but I think this Foundation can help some kids stay on track and it’ll be better for their future.” 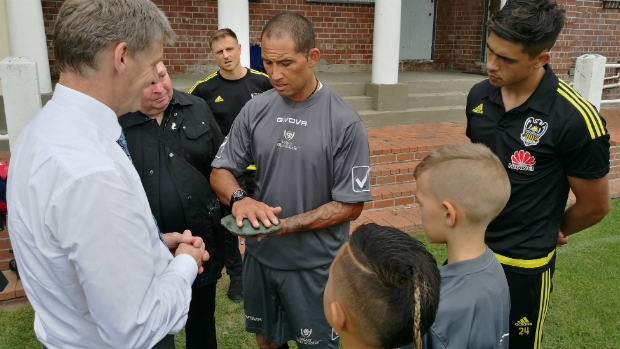 Prime Minister Bill English took time to chat to young players from Maori Football NZ as well as Phoenix Club Ambassador Ben Sigmund, Kosta Barbarouses and Rogerson about the challenges facing young kids, especially from lower socio-economic or remote areas, in finding pathways not just into football but into education.

“It’s great to see a guy of [Reid’s] capability and reputation putting time and resources in behind this kind of effort,” said English, “It will activate kids who might not have been interested and it will keep the interest of kids who would drift off, particularly with this focus on Maori football, I hope that succeeds.

“We’ve put a lot of money into sport over the years in different ways. World Cups, Institute of Sport, a lot of new national-level facilities, so we’re always open to [additional support] because of the benefits for both the example here of excellent sportspeople, which gets people activated and that’s very healthy, and also for the international image of New Zealand as a confident, successful country.”

For Maori Football NZ’s Phillip Pickering-Parker the announcement of funding for infrastructure and scholarships is part of a much larger program of promoting healthier lifestyles and pride through seeing prominent role-models such as Reid at the top of world football.

“We focus on education, social inclusion and wellbeing and we use the model of football to promote all of those things. [Winston’s] very important. He’s our ambassador to start and I was very fortunate to talk to Winston at the 2010 World Cup, and also Rory Fallon, Leo Bertos and Jeremy Christie and we talked about why more Maori aren’t looking at football as a first-choice sport as it’s a very athletic sport.

If we can keep pushing the healthy messages then we’re going to be able to address and face some of the demons that plague the people.”