Wellington Defender Luke DeVere shares his thoughts on resuming the A-League season, life in Brisbane, keeping fit in isolation and balancing parenthood with being a professional football player.

For Phoenix Defender Luke DeVere, the effects of the recent pandemic, combined with the postponement of the Hyundai A-League and the impending birth of his second child, created some unique challenges for him and his family.

Now in Brisbane, 30-year-old Luke has been relishing the time he’s been able to spend with his wife Tygar and their two children – 2 year-old Beckett and 2-month-old Henley – after the A-League was suspended in late March.

Flash back to March 15, after the Nix had handily dispatched a Melbourne Victory side 3-0 at Sky Stadium in what would end up being their final home match of the season.

Without uncertainty about seriousness of the Covid-19 situation, and rumours of travel restrictions and a possible lockdown being put in place, the Phoenix club made the decision to move their squad across the Tasman to a remote Sydney location. So three days after that match was played, the Phoenix players and coaches were on a plane to Australia and into unfamiliar territory.

Luke says that everything was moving at a rapid pace.

“As things were unfolding and changing day by day, that decision was made that the team would go across and ‘set up shop’ for an unknown period of time.

“My wife was due to give birth in just over 2 weeks time at that point, and we had to decide if I was either going to stay home in Wellington and miss out on the season, or that Tygar and Beckett get back to Brisbane and her family and friends, which would allow me to continue on with the team.

“Once we confirmed with the medical professionals that it was all ok and safe to travel at that stage of her pregnancy – as long as we packed up and left immediately – we took the first flight to Brisbane that we could, and I was then able to join the team in isolation in Sydney.”

For Luke, the opportunity to finish out the club’s strong season in Australia was tempered by the possibility that he couldn’t be there for his daughter’s birth.

But then as it all developed and borders started closing, there was the serious prospect that this might not be able to happen.”

When the decision was made by FFA on 24 March to postpone the Hyundai A-League season, Luke shared the team’s immense disappointment – but also saw this as an opportunity for him to re-join his family in Brisbane in time for Henley’s impending arrival. So he made the 11 hour drive to Brisbane, all the while continuing to fully isolate himself.

“When it all fell apart in Sydney I made my way back to Brisbane and isolated there with them as soon as I was allowed to; then we came straight out of isolation and Tygar had the baby the next day. 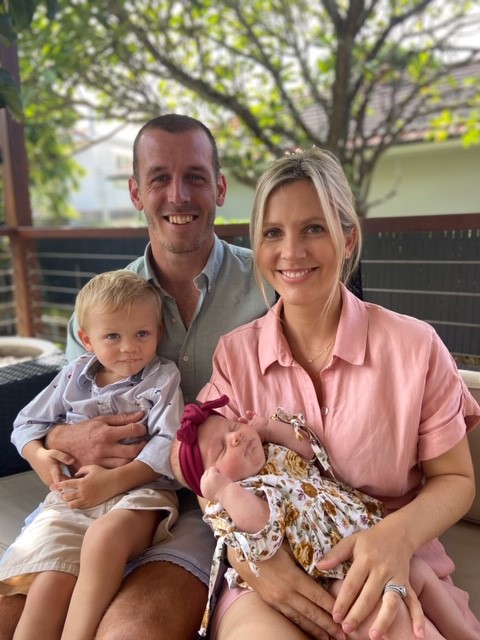 “I’m grateful to the club; Coach Ufuk and the staff were all incredibly understanding and supportive of my situation, allowing me to travel up to Brisbane as soon as I was able to.”

Now two months on from that situation, Luke says that it’s been an adjustment to now being a father of two, but him and Tygar are loving every minute of it.

“The sleep has been average but Beckett wasn’t a great sleeper anyway so the bar is set pretty low on that front! We’re coping ok and Henley is happy and healthy, which is the most important thing.”

Both Luke and Tygar have been asked a lot around where they got the name Henley from.

“We were tossing around with a few different names and we stumbled across it somewhere, in a book I believe, and took a liking to it – we like names that are a little bit abstract but not ‘too’ out there and every time we thought about picking a name, we kept coming back to that one.

“And my wife’s name is Tygar so we couldn’t go with anything too plain I guess.”

Luke says that one of the differences around having two children as opposed to one, is no longer having that ‘little break time’ once you’ve got them off to sleep in the day time.

“Now with two children, you get the baby off to sleep and realise there’s still another two year old there, awake, full of energy and wanting to play while they have your undivided attention.

In addition to his fatherly duties, Luke is also finding time to stay in shape in preparation for a resumption of the A-League season. In a feat of work/life balancing, he has developed a regular routine for training and parenting that he says is working – for now at least.

“Lately I’ve been doing a bit of training with some of the other Brisbane-based A-league players from other teams; I’ve gotten into a routine of training 4-5 days a week between 7.30 – 9.30am with them where I get up at 6am and help get breakfast for Beckett and help Tygar with Henley, then shoot off to do a couple hours training before coming back for some family time and more training at home.

“I’m fortunate to have a mate in Brisbane who owns a gym so he was able to deliver me a spin bike when I couldn’t leave the house – I’ve been using that at home and once the isolation restrictions eased I was able to organise some weights for home so I could do some strength training.”

Luke has been keeping in touch with his teammates during this time, checking in with players for a general catchup whenever he can. As one of several ‘dads’ on the team, he’s also been there to offer fatherly advice to some of the younger players as well as sharing parenting tips with other parents in the squad.

“We’re a pretty tight bunch from what’s happened this season and what we’ve all gone though, a lot of the guys are quite close.

“Kids are a massive part of our lives and the players are always talking about the things that matter most in their lives – so inevitably the discussions come up around parenting and how we’re all coping; our kids are all different ages, Bally’s are a little bit older, mine are young and Hooper’s are somewhere in between, and Ulises just had his first child – so he’ll probably feed off us a little, we’ll give him tips we’ve picked up to help him as a new father.”

Luke credits his wife for helping maintain a balance between being a professional footballer and a parent, especially during times when his work takes him away from his family for long periods.

“When I have to travel with the team during the season, Tygar does a fantastic job of keeping everything afloat while I’m gone and having to do it all on her own at times.

“At times I’m not sure how she does it all really, especially when I have to deal with both kids by myself for a few hours – and I think to myself ‘she’s been doing this for days on end sometimes!’, so Tygar is definitely the biggest factor as to how I manage that balance.”

Luke knows that he’s blessed to be doing a job he loves, with the added benefit of being able to spend quality time with his family when he’s at home.

“For us as footballers it’s a wonderful thing to be able to do what you love and also be able to spend that time with your loved ones. Inevitably it won’t be forever so while my kids are at a young age, I appreciate being able to witness their development and their milestones, it’s a great thing and I don’t take it for granted.

“I’ve always said we’re quite fortunate as a family that I’ll only train for a few hours and then have the rest of the day to spend with family – whereas a lot of people in 9-5 jobs would miss out on that time – so whilst there’s sacrifices we make when we travel, we do get to spend large amounts of time with them which is a huge benefit of being a professional footballer… having that balance.”

While he’s been enjoying his extended family time, Luke also has one eye on the resumption of the A-League season and hopes the announcement comes soon.

“Our squad and our depth will be fully tested, but it’s also a great opportunity for guys that maybe haven’t played as much to step up and contribute in a positive way on the field… I’m sure we’ve got the players and the squad to get through this hectic period.

“At the end of the day, everyone on the team is committed and we all want to see off this season in a positive way, especially considering the effort we’ve put into getting to where we’re at on the ladder and where we left things.”

In facing the potential for being based in Sydney for 6-8 weeks – if and when the season resumes – Luke is comforted by the fact his family will be in Brisbane with a solid support network in place.

“That was a big part of why we got the family back here in the first place, we thought if there’s a period they’ll be without me around then we’ve got family and friends in Brisbane to help Tygar out – that was very important to me, as it helps me to focus on helping the club finish off this season on a high note.”