With a gusty, chilly Southerly whipping across Island Bay’s Wakefield Park you could easily picture a bunch of 12, 13 and 14 year old boys preferring to hide indoors.

But with jackets done up to their noses, hands tucked into sleeves and feet shuffling to ward away the cold, the young participants stayed stoic.

Their first lesson if they want to train like the professionals? Get used to braving the weather.

On Thursday and Friday, boys from Wellington, and from as far afield as Kapiti Coast and the Wairarapa enjoyed two full days of both theoretical and practical sessions – receiving professional-level coaching from the Wellington Phoenix Football Academy staff, as well as hands-on support from current Academy players and graduates.

A-League players Logan Rogerson and Sarpreet Singh took time out of their schedules to chat to the boys in between sessions covering topics such as executing fast-break counter attacks, short passing build up and playing passes in behind the defence.

Academy head coach Andy Hedge quizzes the boys: “Which comes first – the run or the pass?” Debate ensues, with passionate defence of both options.

The boys watch a series of clips of FC Barcelona’s Lionel Messi in action – and then hear a short Q&A with striker Rogerson – detailing how he bends his runs, what cues he looks for from a fellow player and what feints with his body he can employ to confuse an opposition defender. 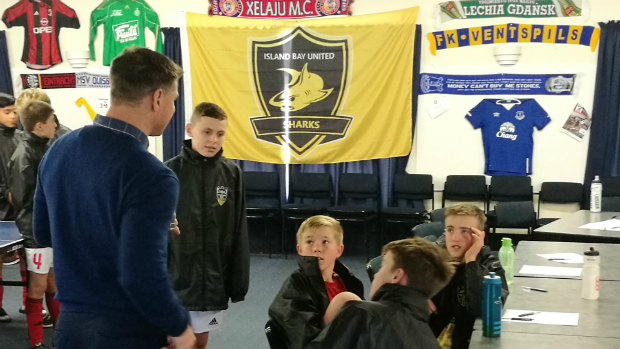 For Caleb, 13, a centre back from Palmerston North it was a chance to experience coaching at a different level, not just in theory but also in application.

“I really enjoyed the session on intercepting and trying to break the defence”, said Caleb. “I like my coaches at school, but here there was just more to learn. We had heaps of different drills, it just made me keep thinking.”

For Otis, 13, a forward with KC United it was more the experience of mixing it with players from some of the bigger Wellington clubs that was rewarding.

“We’ve been driving down and back from the Kapiti Coast”, said Otis, “I’ve really enjoyed it, especially playing against some of the Wellington boys – the skill level was pretty amazing.”

Not just an opportunity to learn how to train like a professional, the Phoenix Way experience often also doubles as a trial for younger boys looking to make it into next year’s Academy intake.

As they young boys heard, for a player like Sarpreet Singh, who recently signed his first professional contract, the journey from hopeful to pro involves thousands of steps, and plenty of sacrifices along the way.

It’s a point not lost on Caleb, who already from the weekend has identified that pace might be a weakness in his game, when training alongside some of the Academy boys.

“Best case scenario, I’d love to be a professional footballer,” said Caleb, “but now I know there’s just so much more to work on. These guys work hard every day. It’s something to aim for.”