The draw for the Hyundai A-League 2019/20 season has been announced with Wellington Phoenix facing off against newly-formed rival Western United on the opening day of the season.

The highly-anticipated opening fixture of the Hyundai A-League 2019/20 campaign will take place at the home of Wellington Phoenix, Westpac Stadium on Sunday 13 October 2019 at the new family-friendly time of 6:00pm (NZT).

Fans can look forward to a blockbuster game to start off the new season at home in Wellington.

Wellington Phoenix General Manager, David Dome, is excited by the draw and believes the fans are in for an outstanding season.

“For a number of reasons the Hyundai A-League draw is extremely complicated and there were a huge number of iterations to get to the final product.

“We’ve worked hard to get game days and times which suit our family fan base and we’re pleased that a new 6pm Sunday time slot was approved, and that Saturday night games will kick off at 7:15pm.

“Fans asked to open the season at home to the new franchise and we’ve got it, it will no doubt be a fiery encounter and we’re looking forward to our biggest opening day home crowd ever,” David Dome commented.

The fixture will be the first of 11 home games held at Westpac Stadium with a further two being held at Eden Park in Auckland.

Western Sydney Wanderers will be the first opponents in Auckland on Saturday 7 December 2019 while Melbourne City will visit on Saturday 15 February 2020.

“Eden Park was such a huge success for us as a club last season on so many levels, with our largest ever regular season crowd and last season’s sixth largest crowd overall across the entire League, with over 22,000 coming out to support the club.

“Eden Park make us feel very welcome and it just makes so much sense to return there and hope the fans turn out again to be part of the unique sporting atmosphere that is a Phoenix home match.”

With the draw being released and fixture dates confirmed, Northern Memberships which represent outstanding value for money are now on sale here.

Individual game day tickets will be available to purchase through Ticketek in the week commencing 26 August. 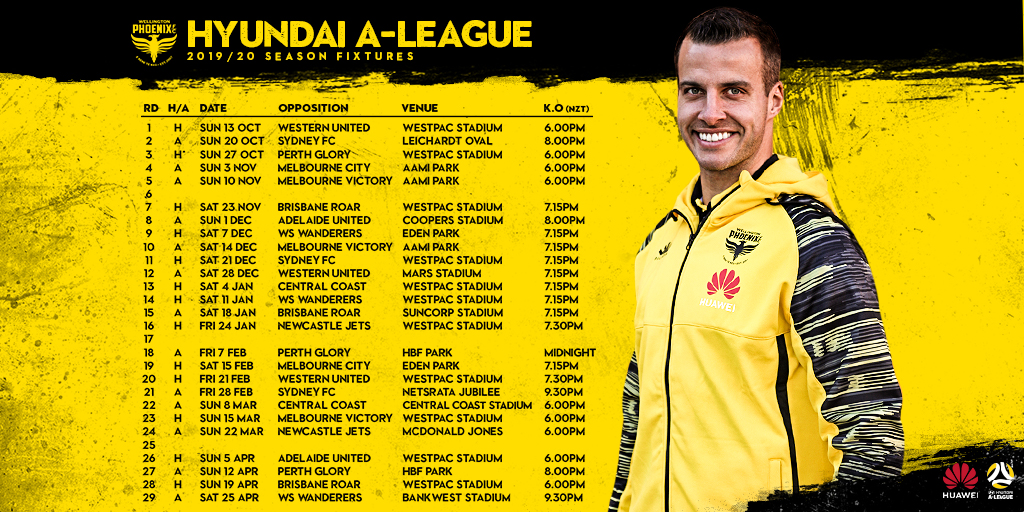