Perth Glory have kept their finals hopes alive with a gritty 1-0 win over Wellington Phoenix at Westpac Stadium on Sunday afternoon.

Chris Harold gave the visitors the lead in the 21st minute with a well-taken header before some stoic defense repelled a desperate Phoenix outfit in the second stanza.

Andy Keogh missed a golden opportunity to seal the points midway through the second half but the Glory held firm to secure a deserved win in New Zealand. 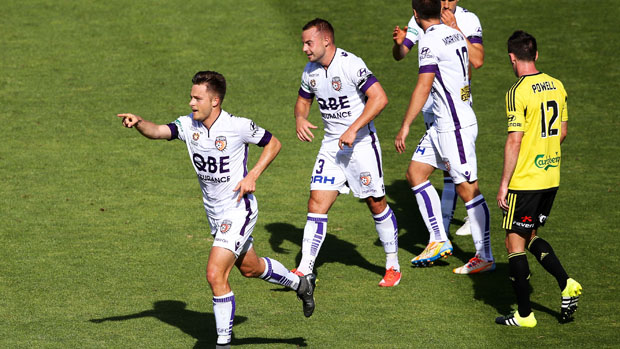 The Phoenix started brightly and almost took the lead in the 14th minute with youngster Joel Stevens forcing a brilliant save from Glory keeper Ante Covic. The 21-year-old controlled the ball expertly inside the area before smashing a volleyed effort on goal which was well parried behind by Covic.

Phoenix shot-stopper Glen Moss didn’t have a lot to do throughout the 90 minutes but a couple of brilliant kept the hosts in the contest. Glory midfielder Nebo Marinkovic looked set to double the Glory’s advantage with a curling effort from the edge of the area in the 52nd minute but Moss was up to the task, acrobatically palming the ball away to safety.

Michael McGlinchey had a glorious chance to level proceedings on the stroke of half time but inexplicably miscued his shot with the goal gaping. Louis Fenton fired a brilliant ball across the six yard box which fell kindly to the onrushing McGlinchey, but the midfielder shot straight at Glory keeper Ante Covic who cleared the danger.

Phoenix had seven corners in the opening stanza alone but the hosts failed to make the most of the set piece opportunities with consistently poor delivery making it easy for the Glory to defend.

Glory’s mid-season revival continues with the win ensuring their finals hopes are still well and truly alive ahead of next week’s clash against Sydney FC.

Wellington’s hopes of making the top six are now realistically over with Ernie Merrick’s outfit 11 points behind the sixth-placed Reds with just nine games remaining.

Injuries have really curtailed Phoenix’s season but they have some unearthed some superb youngsters with Joel Stevens and Dylan Fox real stars of the future for the Kiwi club.