The aim of the Multicultural Council of New Zealand (MNZ) Community Awards is to recognise the efforts and contribution of people and organisations who have gone above and beyond to deliver support to the community, in particular those who have had a positive impact on New Zealand’s ethnic migrant and former refugee communities.

The award was presented to David Dome in recognition of his and the club’s contributions to migrant communities, in particular through their Football Diversity and Inclusion Programme (FDIP) and Football for All initiatives. Dome says that it is an honour to receive this recognition.

“This award provides validation for all the people and organisations who have been part of our very important community programme – it is really an award for the whole club.

‘’Our Football for All programme funded 50 young refugee and immigrant children – who otherwise could not have afforded to participate – to play football through their local football club.

“I want to recognise the efforts of all the staff who worked on this programme and liaised with Capital Football to make it happen, as well as principal funder Lloyd Morrison Trust and partners New Balance – who provided boots to all players free of charge – and the contribution of the Office for Ethnic Affairs.

“Special thanks must go to the Trustees of the Football for the Community Charitable Trust who oversaw the entire programme and helped make it a success for everyone involved.

‘’We could not have delivered this programme without the local Multicultural Councils and New Zealand Police’s Rakesh Naidoo, both of whom have been instrumental in growing our diversity and inclusion community programme over the last four years.’’ 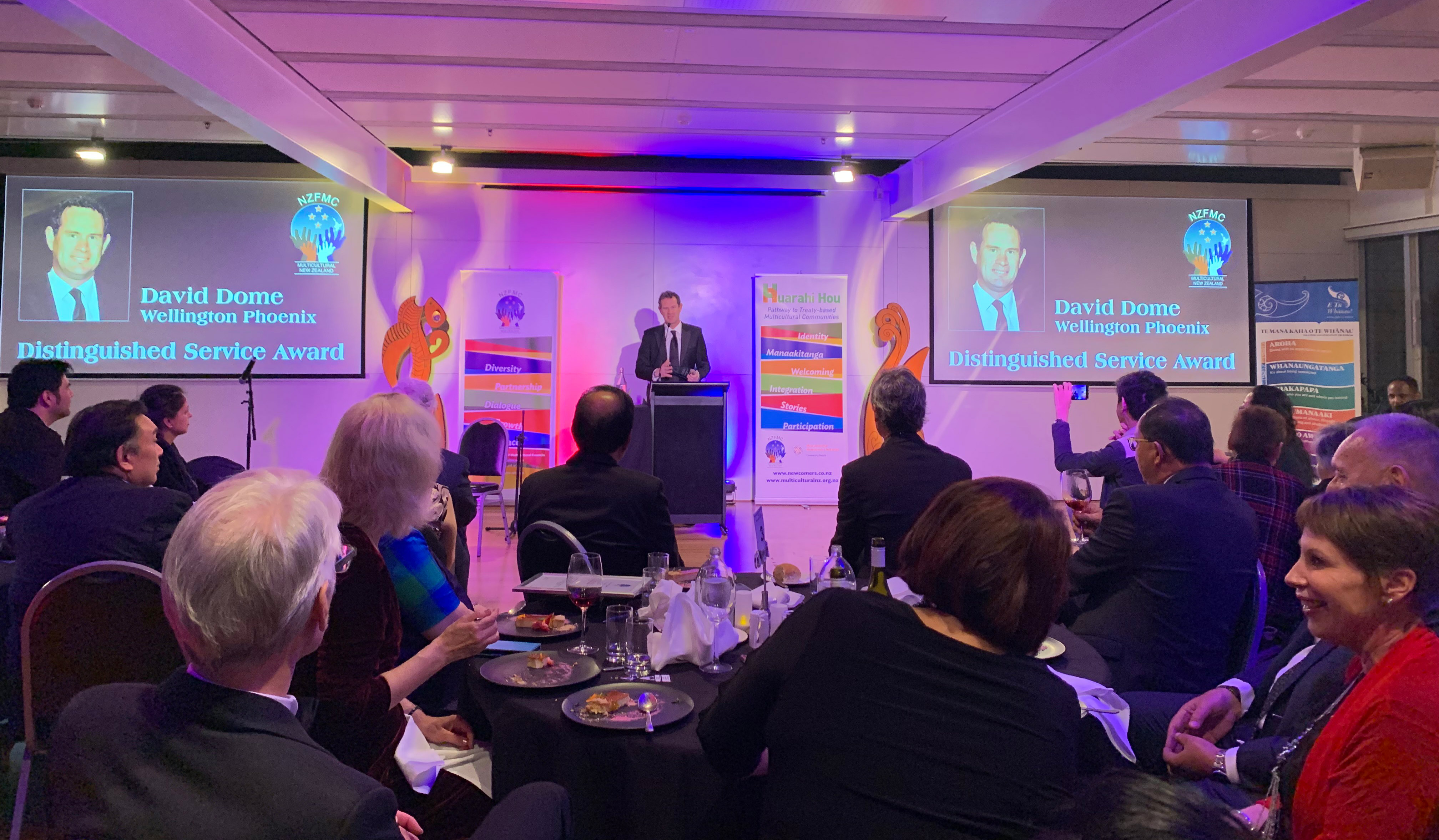 Dome says that it is important for professional sporting organisations such as the Phoenix to give back to the community that supports them, and to give people opportunities to experience football as a spectator, player or organiser.

“It’s all about inclusion and that’s a key part of our club’s values; we often talk about Whanaungatanga which means kinship and a relationship through shared experiences, and our community programme embodies this belief and provides access to those who often don’t have these types of opportunities.”

The Wellington Phoenix first launched their FDIP programme in 2017, offering former refugees and recent immigrants in the Wellington region season tickets, tickets, and bus transport to Phoenix matches as well as club merchandise and lunch at the game; in recognition of the important role sport plays in building bridges between individuals and across communities.

This programme has grown over subsequent years to include migrant families in Auckland and other parts of New Zealand, and to also include the ‘Bus to the Nix’ event which provided complimentary transport and match tickets for 2,500 children and families – many from lower social-economic backgrounds – to attend Phoenix home games.

About Football for All

The Football for All programme was launched in June this year, targeted at refugee families and recent immigrants to the Wellington region – with the aim of fostering inclusivity, participation and well-being by using football as a vehicle to help specific communities who otherwise wouldn’t have the opportunity to experience and engage with sport.

Facilitated by Football For the Community Development Trust (FCDT) and primarily funded by the Lloyd Morrison Trust, this initiative provided a ‘scholarship’ for 50 children aged between five and 17 from ethnic communities into their local football clubs: the programme paying for club subscriptions, uniform costs, employed local community coordinators who arranged funded travel to and from trainings and games, and provided football boots via New Balance.

The programme aims to expand its offering to 100+ participants in Wellington in the future, with other centres joining the programme once funding can be sourced.

The New Zealand Federation of Multicultural Councils Inc. was established in July 1989 as an incorporated, non-government body, which acts as an umbrella organisation for the ethnic communities of New Zealand.

The Federation’s primary role is to promote, support and share information among the Regional Councils and New Zealand’s Ethnic Communities. The challenge for NZFMC is to provide an opportunity for people from all segments of New Zealand’s diverse society to address the challenges facing our multicultural communities on the threshold of the 21st century.