Luis Garcia has wound back the clock in Christchurch on Saturday night, with his sublime interventions leading the Mariners to a 3-1 win over Wellington.

The Spaniard was involved in all three of his side’s second half goals having been introduced after the break to give the Central Coast just their third victory of the season.

The Phoenix, who boast a proud record in taking home matches away from Wellington, toiled from start to finish but only had a late consolation goal to Blake Powell to show for their efforts.

Both captains were forced to miss the clash through suspension with Glen Moss and Fabio Ferreira wearing the armband for their respective youthful sides.

There was also a first appearance for Wellington’s 17-year old defender James McGarry but this match will remembered as the game Garcia announced himself to the A-League.

0 – 1 Garcia (50’) – It took just five minutes for Mariners marquee Luis Garcia to stamp his mark on the contest having been introduced after the break. A cross from Ferreira was fumbled by Moss and Garcia was on hand to pounce, taking a touch before sweeping an audacious back-heel into the back of the net.

0 – 2 Roux (53’) – The former Spain international turned provider just minutes later playing a delightful return pass for Storm Roux to register his first goal of the season. The All Whites defender made an incisive run forward before playing a one, two with Garcia and stroking home past Moss.

0 – 3 Austin (85’) – The Mariners livewire sealed the result with five minutes remaining under controversial circumstances. A through ball from Garcia was chased by an off-side Ferreira, who eventually left the ball for a charging Austin. The referee let play go on with Austin squeezing the ball past Moss from a tight angle. 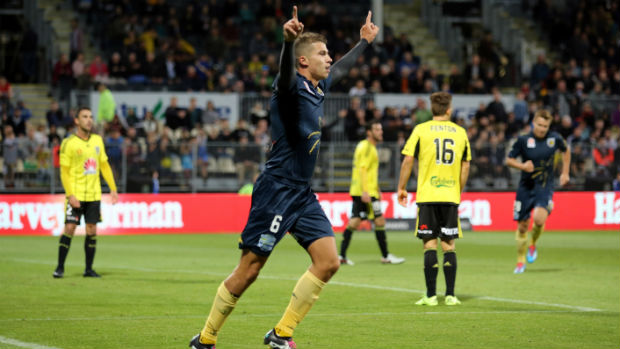 1 – 3 Powell (90+2’) – The Phoenix got a late consolation when they managed to catch the Mariners out at the back. Tom Doyle whipped in a cross from the left that picked out Powell at the back post. The striker hit the ball first-time, guiding it past the outstretched Izzo to get his side on the board.

The result was just the second time from 14 matches the Phoenix have been beaten having taken a home game outside of Wellington.

The win for the Mariners was their first in 22 away matches.

Mariners goalkeeper Paul Izzo pulled off a couple of spectacular saves to keep his side in the contest. In the first half the Olyroos shot-stopper denied Roly Bonevacia scoring another long-range stunner with a diving effort. The 21-year-old backed up that save after the break to turn a looping Tom Doyle header from a Phoenix corner round the post.

The Mariners are up to 12 points on the ladder after notching back-to-back wins against Wellington. Luis Garcia proved to be the difference with his influence set to ensure there is a feel-good factor in Gosford for the rest of the season.

The loss extends Wellington’s winless run to eight matches as they once again failed to make up ground on the top six. Coach Ernie Merrick will be desperate to bring in a striker before the transfer window closes with his side badly missing the injured Roy Krishna.