A Bruno Fornaroli-inspired Melbourne City have moved to the top of the Hyundai A-League after dispatching Wellington Phoenix 3-0 on Easter Monday at AAMI Park.

Fornaroli scored twice and laid on a cheeky assist for the other goal on a night when City showed their Premiership credentials, and they did it without midfield star Aaron Mooy.

City join Roar on top of the A-League on 44 points but their far superior goal-difference sees City lead the ladder with two games to go.

It was a first half short on excitement, though Phoenix keeper Glen Moss twice pushed away goal-bound efforts.

But a moment of magic from the sublime Fornaroli allowed Harry Novillo to open the scoring for City just before the break.

A second to Fornaroli midway through the second half and his stunning third sealed the points on Easter Monday at AAMI Park. 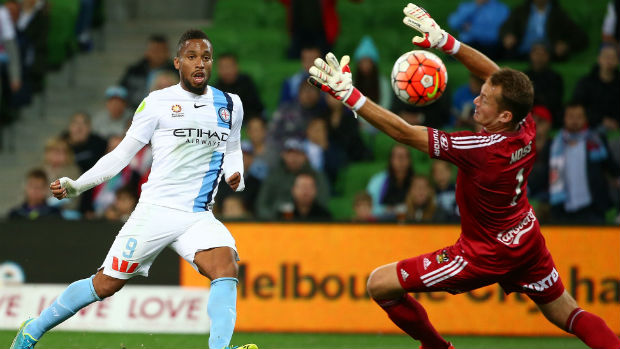 City 1-0 Novillo (42’) – Fornaroli fed Novillo on the edge of the box. The Uruguayan ran on, got the ball back and, facing the goal, deftly lifted the ball over the defence for the on-running Frenchman to smash past Moss. Class goal from two classy imports.

City 2-0 Fornaroli (pen, 65’) – Zullo was clipped by Riera and the ref pointed to the spot. Fornaroli blasted it at Moss who saved it but the striker smashed home the rebound to double the lead and nail his 21st goal of the season.

City 3-0 Fornaroli (81’) – Ball to feet, a sharp turn and Fornaroli did what he does best. Smashing a curling strike past Moss from the edge of the D. Another moment of magic from the striker who racked up goal number 22.

Fornaroli’s ingenious assist for the first goal. Utterly brilliant, proving the Uruguayan is more than just a goal-machine. Oh, and his second (City’s third) wasn’t too bad, either.

Ben Sigmund and Harry Novillo collided in the first few minutes. “Siggy” continued on, albeit gingerly, before being taken off inside the first 15.

City are now top with two games to go – and they hold a significant goals difference ratio.

They are in the box seat but with Glory away and Adelaide at home, you still can’t say with certainty who will hold the Premiership trophy aloft in two weeks’ time.

But with Mooy back and Fornaroli in peak form, they look odds on right now as the league reaches an incredible climax.

Meanwhile, Phoenix showed plenty of pride and with their recent big signings, will target a finals spot in 12 months’ time.

They face Victory next week at home.