Wellington Phoenix recruit Jeffrey Sarpong is itching to bring his flair and goals to the Hyundai A-League, and he expects to be let off the leash in pre-season next week.

The 27-year-old cut a strapping figure at Lambert Park in Sydney on Wednesday, training away from the group as he seeks to ensure he is ready for a Round 1 home clash against the Newcastle Jets on Sunday October 11.

The former Ajax midfielder is relishing the challenge of proving himself in a new league and revealed coach Ernie Merrick played an instrumental role in bringing him to Wellington.

“It’s been good. He’s the one that played a major role in me coming here,” Sarpong told www.a-league.com.au.

“I’ve had good talks with him and he says he’s going to be on my back, make sure I perform and get the best out of me so I’m looking forward to it.”

Merrick has a history of helping players reach their potential – Nathan Burns’ career trajectory in last 12 months a prime example – with Sarpong hoping he can reach similar heights.

“I’m supposed to just train this week, fitness training, and by next week I should be training with the group so from then on I can start playing,” he added.

“Personally I wouldn’t like to say how many goals I’ll be scoring but I’ll definitely produce a lot of goals, whether it be scoring or setting them up – that’s what I’m here for.” 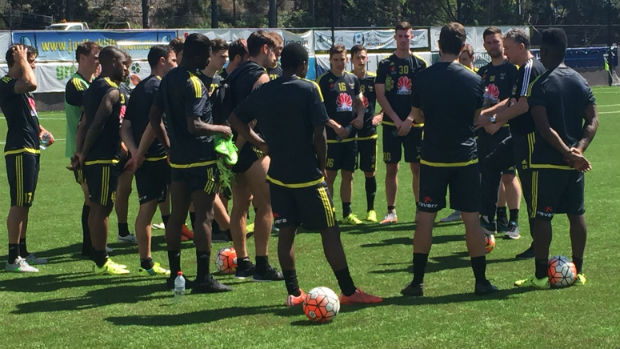 Sarpong, born in Amsterdam and is of Ghanaian decent, has yet to feature in any of the Phoenix’s recent friendlies.

Given he has not played since May, the club is taking a cautious approach with their star Dutch signing and as such he’s unlikely to play against Sydney FC in Wollongong on Friday night.

Sarpong confessed he knew little about the Hyundai A-League before signing his two-year deal last month, however former teammate Roly Bonevacia was helping to bring him up to speed.

The pair clearly share a strong bond, having grown up together in Ajax’s famed youth academy, and with both going on to make their senior debuts for the club.

“Before I came here I didn’t know much, only what Roly and the trainer told me.

“But since I’ve been here I’ve been watching some games obviously, FFA Cup games and our own games, it’s going to be a good competition I think.

“He [Bonevacia] looks like a player from New Zealand already. He just needs a New Zealand passport.