Data analysis conducted by Wellington company, DOTlovesdata, has revealed just how important home town support is to the success of the Wellington Phoenix on the field.

With a crucial season defining match against Sydney FC coming up this Sunday that could define who wins the A-League. Fan’s support’s role in winning games has been proven in statistical data analysis conducted by DOTlovesdata.

DOTlovesdata Managing Director, Jason Wells has said that they have quantified what fan support means for the Wellington Phoenix.

“We have crawled over two years of data and with some pretty sophisticated quantitative analysis. We have discovered just how important winning games are to the Phoenix’ crowds and then how crowd sizes influence the outcome of the Phoenix’ matches at Westpac Stadium.

“There is a lot of data, but some really interesting insights have come out around just how important fan support is.

“For example, if the Phoenix win a game, attending fans are 51% more likely to go to the Phoenix’ next home game at Westpac Stadium.

“We also discovered that for every goal the Phoenix wins by, it increases the crowd by 373 people. An increase in the number of games won over the course of a season by 10% is worth almost an extra 900 people per game.

DOTlovesdata have also been able to quantify the value of a big crowd down to player performance.

By integrating Opta performance stats with the crowd data, there are some interesting correlations to team performance and Wells said that it no doubt proves that a big crowd influences player performance on the field as well.

“Combining the relationship between crowd and touch we can say that an extra 2,000 people at the game equals an additional shot at goal.

“Given that football is a game that is won and lost at the margins, an extra shot at goal or successful pass could mean, for example, a 1-0 or a 2-1 win.”

Individual players statistics are also influenced by the size of the crowd.

“The data is quite conclusive, the more people at Phoenix games, the more likely they are to win.”

David Dome, General Manager of the Phoenix said, “We are really excited at what DOTlovesdata is doing for us. It makes us look at our game day data in a different way”.

The Phoenix play Sydney FC this Sunday at 5pm in a crucial match that will decide who finishes second at the end of the regular season and who goes straight through to the A-League Semi Finals.

Tickets to Sunday’s game can be purchased here: http://premier.ticketek.co.nz/shows/show.aspx?sh=PHOENIXH15 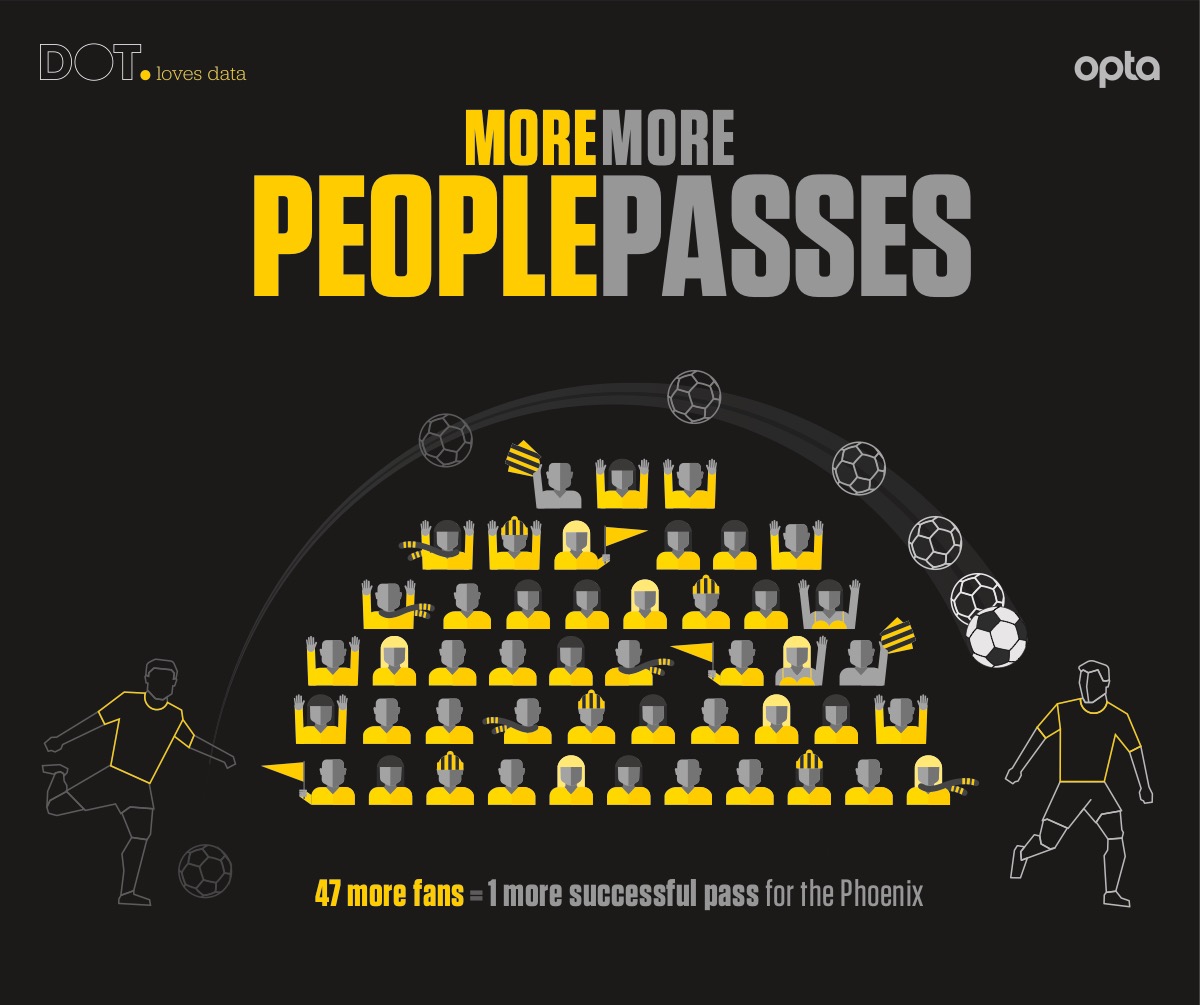