A goal to Mark Bridge five minutes from time has handed Western Sydney Wanderers a 2-1 win over Wellington Phoenix in an entertaining clash at Pirtek Stadium on Saturday.

In front of almost 15,000 fans, a pulsating encounter looked headed for a draw after Manny Muscat’s goal for Phoenix cancelled out Federico Piovaccari’s early opener.

But Bridge had the final say with a composed finish from a corner in the 85th minute to give the Wanderers a fourth straight win to stay on the heels of league-leaders Brisbane Roar.

1-0 Piovaccari (9’) – A swift counter-attack from the home side saw Mitch Nichols slide a through ball into the path of Mark Bridge, who had timed his run perfectly to stay onside. Bridge surged through towards goal and as he got to ‘keeper Glen Moss unselfishly squared to Piovaccari to tap into an open goal.

1-1 Muscat (18’) – The ball made its way to Muscat on the left of the box, with the left-back cutting inside of one defender before his low shot went through a crowd of players and nestled in the far corner of the net. 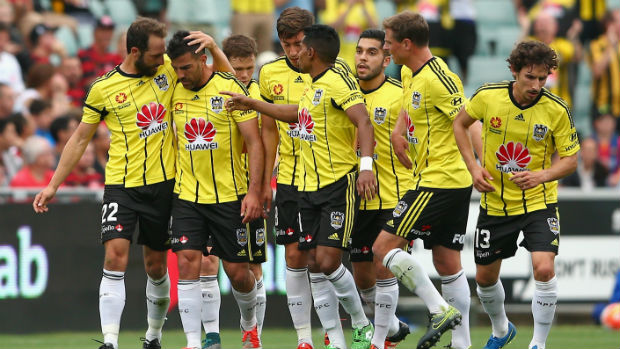 2-1 Bridge (85’) – A Wanderers corner was flicked on by Brendon Santalab, with the ball looping to Mark Bridge at the far post. The attacker took it down and around Roy Krishna in one touch before steadying himself and firing into the roof of the net.

Talk about end-to-end football. Inside 10 minutes Phoenix had a great opportunity from a free-kick right on the edge of the Wanderers box.

Michael McGlinchey couldn’t have hit his effort any better, curling it up and over the wall only for the ball to slam back into play off the crossbar.

In the blink of an eye the Wanderers won possession and broke forward, scoring down the other end just 10 seconds later through Piovaccari. 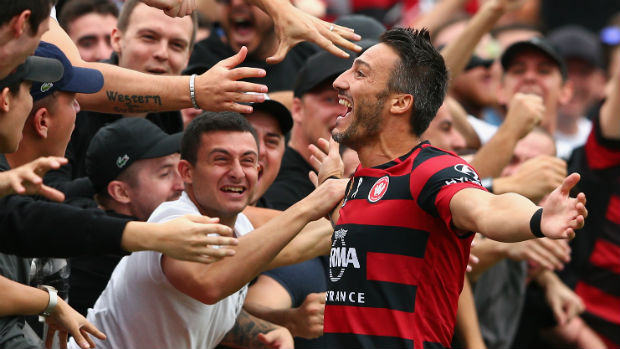 The Wanderers made it four straight wins for the first time since November 2013, when they went on a similar streak between rounds 3-6, with Bridge also scoring the winner on that occasion.

After going five games unbeaten against the Wanderers, Wellington has now lost the last two clashes between the two sides.

The home side dominated most of the match, enjoying almost 60 percent of possession, having 19 crosses to the visitors six and double the shots on target (6 to 3).

The Wanderers’ Scott Jamieson isn’t known for possessing a strong right foot, much more comfortable on his left.

But the defender was desperately unlucky not to get his name on the scoresheet on 15 minutes after a partially cleared corner found its way to him about 25-yards from goal.

“Jamo” hit a sweet first-time volley with his weaker foot which scorched towards goal, hitting the post and nestling in the back of the net.

It would undoubtedly been of of the goals of the season, if referee Strebre Delovski – perhaps harshly – hadn’t already whistled for a foul in the box by Piovaccari.

In a worrying sign for the Phoenix, defender Ben Sigmund had to be carried from the field early in the second half after collapsing to the ground off the ball, despite not being involved in the play.

The Wanderers extended their winning streak but there’s a lot more to like about their play than just the results. There’s a lot to like about what Popovic is building at Wanderland. Some of the combination play in the front third is the best the club has ever produced and should only get stronger as the season goes on. Western Sydney travels to Gosford next on Sunday week to face the Mariners.

Phoenix boss Ernie Merrick will be disappointed not to have got something from the match despite being level for so long. They showed great character to fight back from a goal down, only to give it away near the death. They have a short turnaround before their next trip, again in Sydney against the Sky Blues at Allianz Stadium on Thursday night.