All Signs Are Pointing to Great Things for the Phoenix

Early on in the Hyundai A-League 19/20 season, the young Wellington Phoenix are starting to shape an identity – as a high-energy, relentlessly attacking unit that keeps its opponents on its heels and plays an entertaining and passionate brand of football.

Although the Phoenix fell 2-1 to Sydney FC in front of a raucous crowd of 12,538 at Leichhardt Oval, they made sure to make Sydney work extremely hard for the win. It was also a feisty contest that featured six yellows and one red card between the two teams, along with 20 shots at goal from the Phoenix – besting their tally of 14 in Round One versus Western United.

Returning to the ground where he served as Assistant Coach under Steve Corica last season, Coach Ufuk Talay put out the same starting 11 for the Phoenix as for last round’s match against Western United; a sign of confidence in his team after they dominated the second half of action in that game.

In their home debut and coming off of a Round one win versus Adelaide United, Sydney FC came in as favourites for this match in their home debut; having only lost one of their past nine games against Wellington. They started off on a quick attack in the first five minutes, putting early pressure on the Phoenix that the away team did well to fend off – with Steven Taylor and Luke DeVere leading the way in slowing down Adam Le Fondre in attack.

This was followed by back and forth attempts by David Ball and Rhyan Grant, with both Ball and Jaushua Sotirio finding it difficult to penetrate Sydney’s swarming defence.

A goal from Brandon O’Neill at the 17 minute mark put Sydney on the scoreboard, making a heavily deflected shot from inside the box after Wellington failed to clear a corner.

Ulises Davila nearly equalised a few minutes later, thanks to a flashy setup from Ball that was collected by Sydney goalkeeper Andrew Redmayne. The Wellington Phoenix seemed to come alive at this point, with strong attacking play from Davila, Ball and Callum McCowatt that gave Redmayne and the Sydney defence a real headache. Credit is due to both Grant and Redmayne for their energy on defence, with the latter making a top-drawer save in the 45th minute to deny Sotirio a certain goal.

A yellow card to Phoenix’s Matti Steinmann saw the momentum shift just before half-time, with Kosta Barbarouses firing towards goal only to see Stefan Marinovic make a spectacular fingertip save – his third impressive stop in his first two matches.

Heading into the half down 0-1, the Phoenix knew they had to come out strong in the second half – and that’s exactly what they did, with a great attacking play in the 50th minute that saw Ball dropping into Davila inside the box, with the shot saved by Redmayne before Ball hit the post; agonisingly close to an equaliser.

Unsuccessful shots were traded between Alex Rufer, Le Fondre and McCowatt, before another header by Rufer from a superb McCowatt setup that just missed the goal. A dominant half from the Phoenix had fans thinking that a goal was only a matter of time – and it was Davila who made this a reality in the 69th minute, who skipped around his defender and finished into the bottom corner. 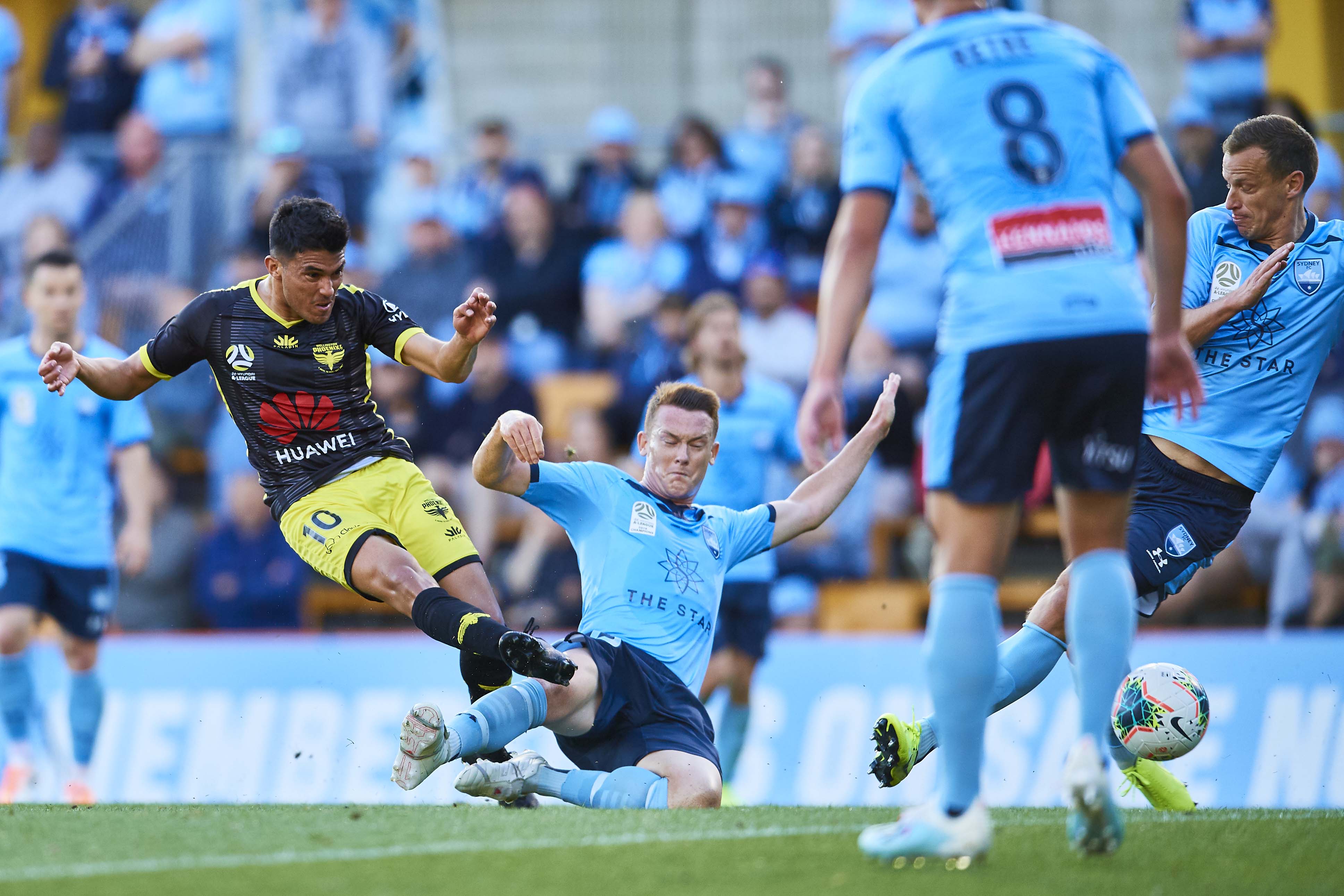 Davila’s goal was well deserved and a first in several respects; his first goal in the Hyundai A-League, the Wellington Phoenix’s first goal of the season and – most impressively – the first ever goal by a Mexican Player in Hyundai A-League history.

For the score tied up at 1-1, Wellington continued to dominate and show confidence in attack. Despite this, Sydney countered – with Grant scoring an improbable goal in the 77th minute to put the home side up 2-1, looping the ball over Marinovic after a free kick deep inside Wellington’s half.

A red card for Liberato Cacace in the 81st minute, after a tackle on sub Anthony Caceres, put the Phoenix down to 10 men on the field. But despite being a man down, Wellington continued to push for an equaliser with substitute Ben Waine laying it off for Reno Piscopo inside the box, who drilled it towards the goal only to see it saved by Redmayne.

Sydney had a few late chances via Le Fondre and Barbarouses, but couldn’t make anything of it. After Piscopo was bought down in the 92nd minute, the Phoenix had a final chance to equalise; but Piscopo’s low driven free kick went through the wall and narrowly wide of Redwayne’s post.

For the second straight game, the Wellington Phoenix dominated play in the second half. While a win is always a desired outcome, such a spirited and controlled effort against last season’s league champions, will give players and fans alike hope that this team – especially once it integrates newcomer Gary Hooper into the squad for Round 3 – could be something special.

74’ OFF 5. Alexander BAUMJOHANN ON 17. Anthony CACERES